Our 40-592A and 40-595A BRIC martix modules are solutions for fault insertion that allows users to easily recreate the fault conditions that need to be simulated when testing controllers that respond to sensors and adjust system controllers accordingly. There are many examples of such controllers used in automotive and aerospace applications.

Fault Insertion involves determining what happens when sensors or other devices give a controller a misleading reading because either the sensor is faulty or a connections fault has occurred. This is a critically important issue in some applications, for example in engine controllers on a jet aircraft when unintended shut down can have major impact on personal safety for passengers. Many controllers of this type therefore go through a certification process where a series of one or more faults are simulated and the controller response is checked to see that it responds in the intended way. Automating this type of test secures the best way of producing a traceable report which is free from human errors and can be replicated routinely. Pickering Interfaces therefore have a family of fault insertion solutions which aid this automation either through a PXI interface or an LXI interface.

The 40-592A and 40-595A offer large PXI-based solutions, this article provides some guidance on their use.

The 40-592A architecture is shown here. One connection (Breakout 1.1) can connect to a fault insertion matrix and has a through connection via a relay (normally closed) to either one or two (shown) breakouts (Breakout 1.2, 1.3) and a second side to a fault insertion matrix. As we will se there are various ways in which this system can be used, a typical use though applies the faults through Y1 to Y4 or Y5 to Y8. 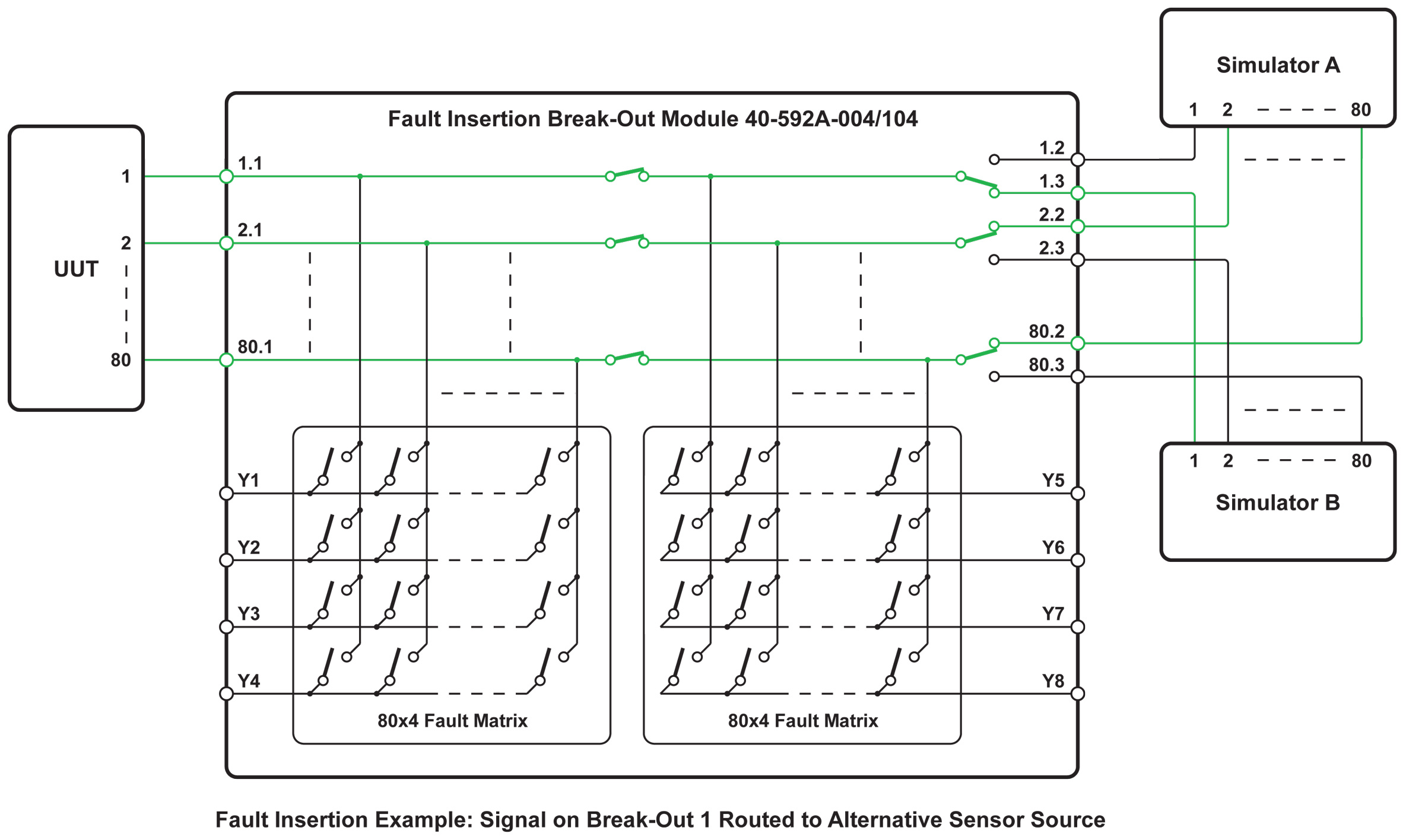 The diagram for the Fault Insertion architecture has been redrawn to clarify how a UUT is connected to a sensor.

In this example the UUT is connected to the x.1 breakouts and two different sensors are connected to breakouts x.2 and x.3. The changeover switch on x.2 and x.3 allows the user to select which sensor to apply to the UUT, one sensor for example might be a real sensor while the second could be a simulated sensor that can be used to introduce errors of a defined type into the system. 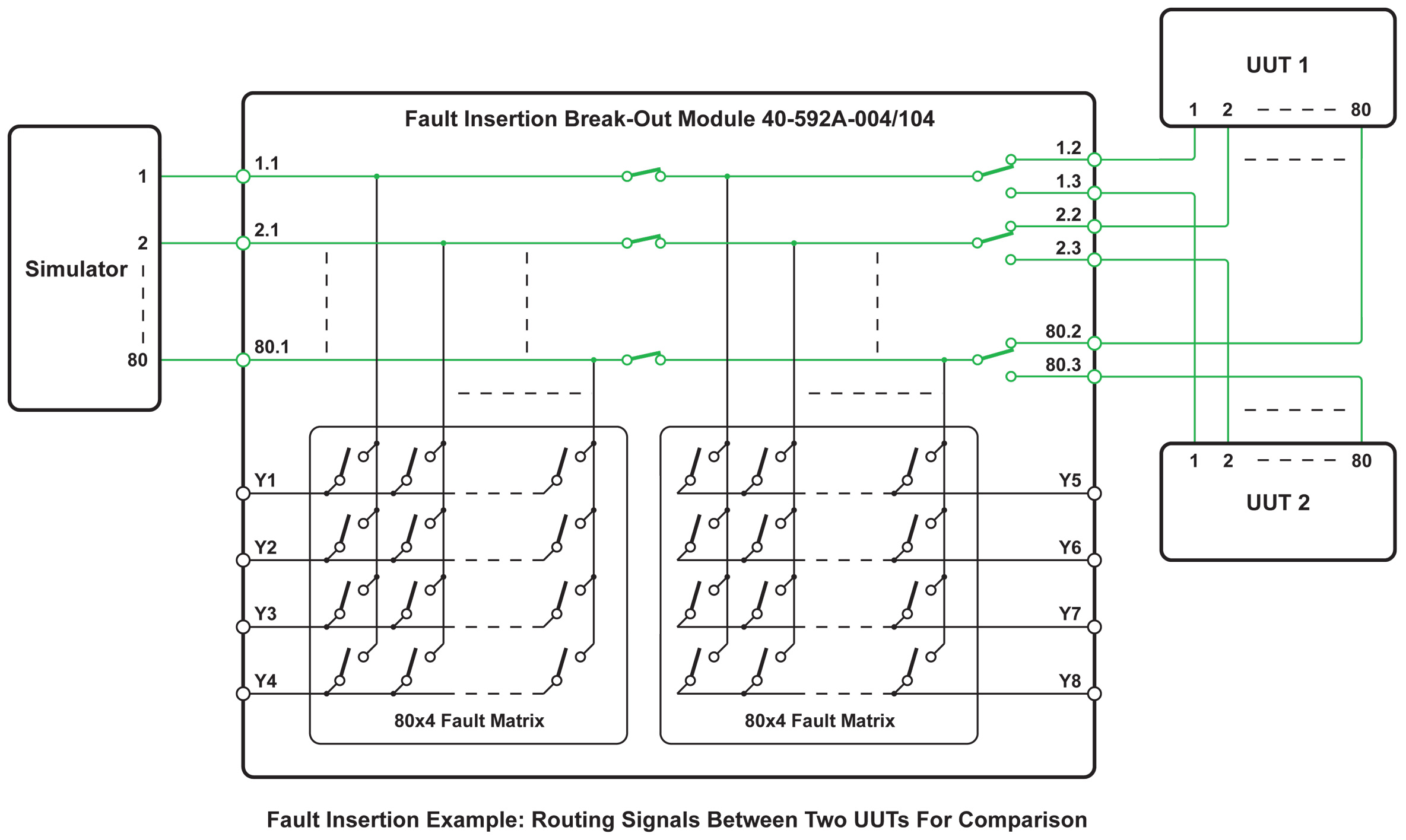 The connections can be reversed so that the UUT's are connected to Breakout x.2 and x.3 so in this case the user can compare the performance of two different UUT's.

Alternatively one UUT can be connected and start testing while connecting a second UUT is being mounted in the system ready for test when the first one is completed. This can help reduce the setup time for the test.

Applying an Open Circuit on the Through Connection 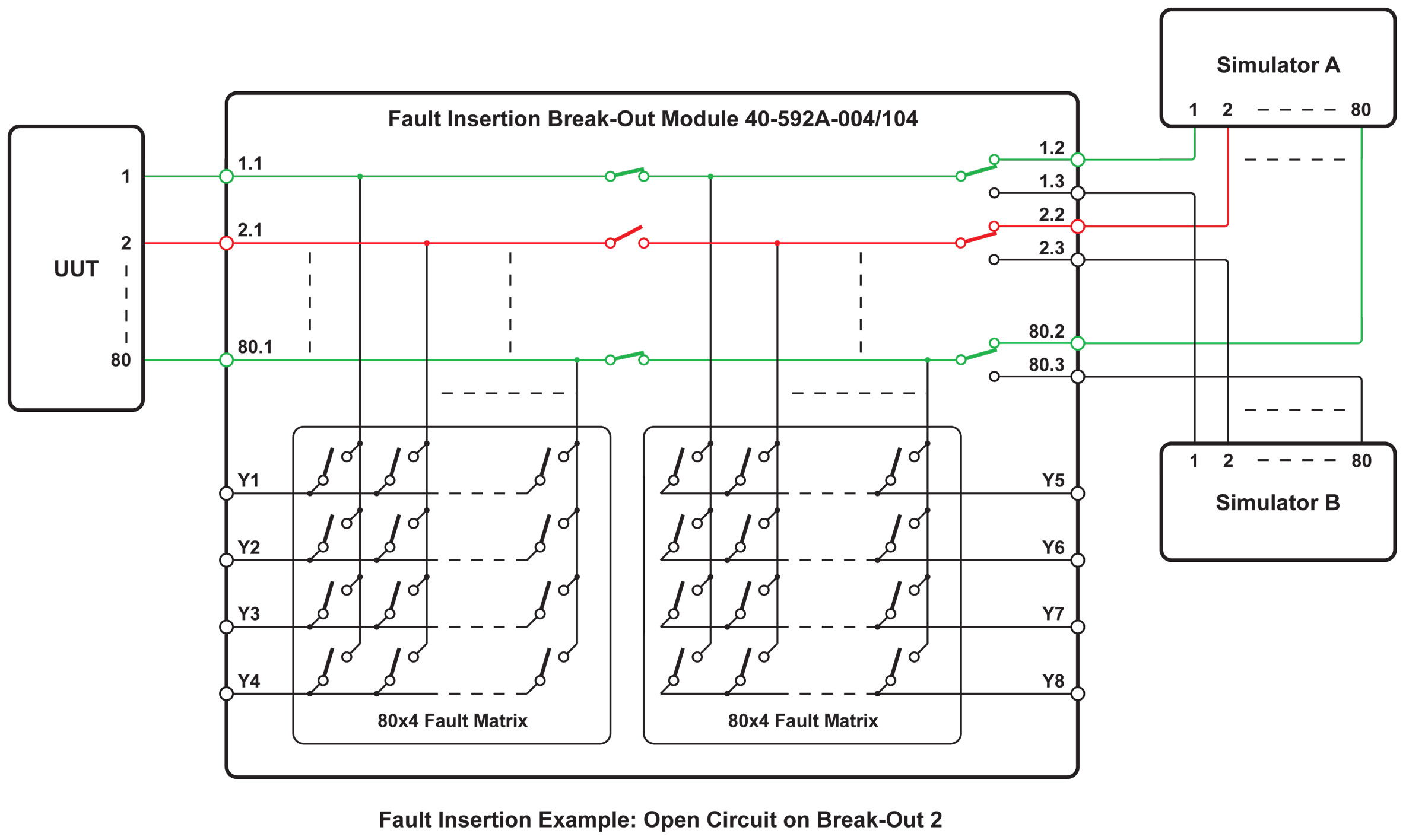 In this example the through relay is opened so that a broken cable can be simulated on the Breakout 2.1 connection. 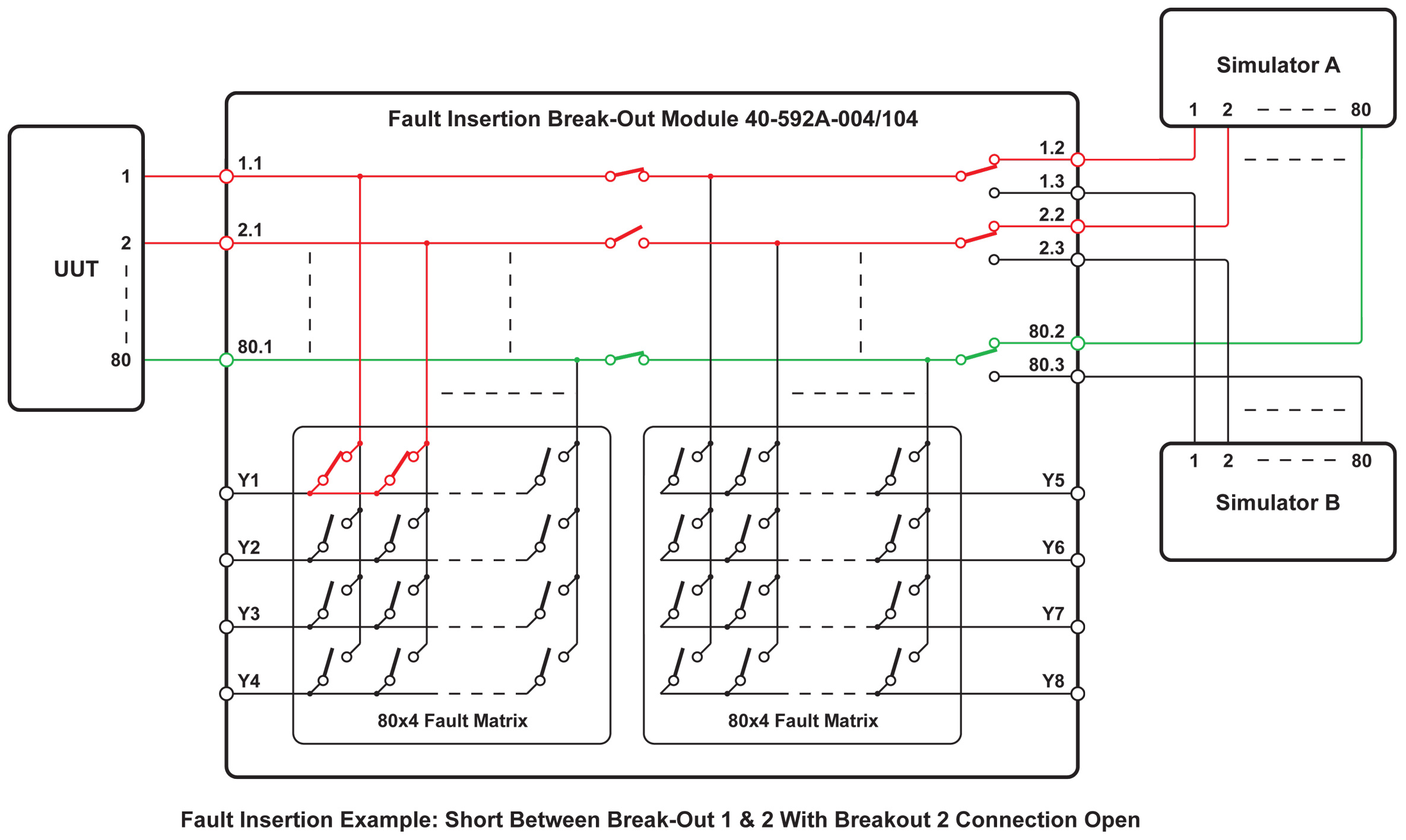 In this example a broken wire is simulated that shorts between Breakout 1 and 2 on the UUT side with the through connection open (so simulating the wire has become disconnected). The short circuit is applied through the Y1 connection, note that the same can be done on the Simulator side, for example through Y5. 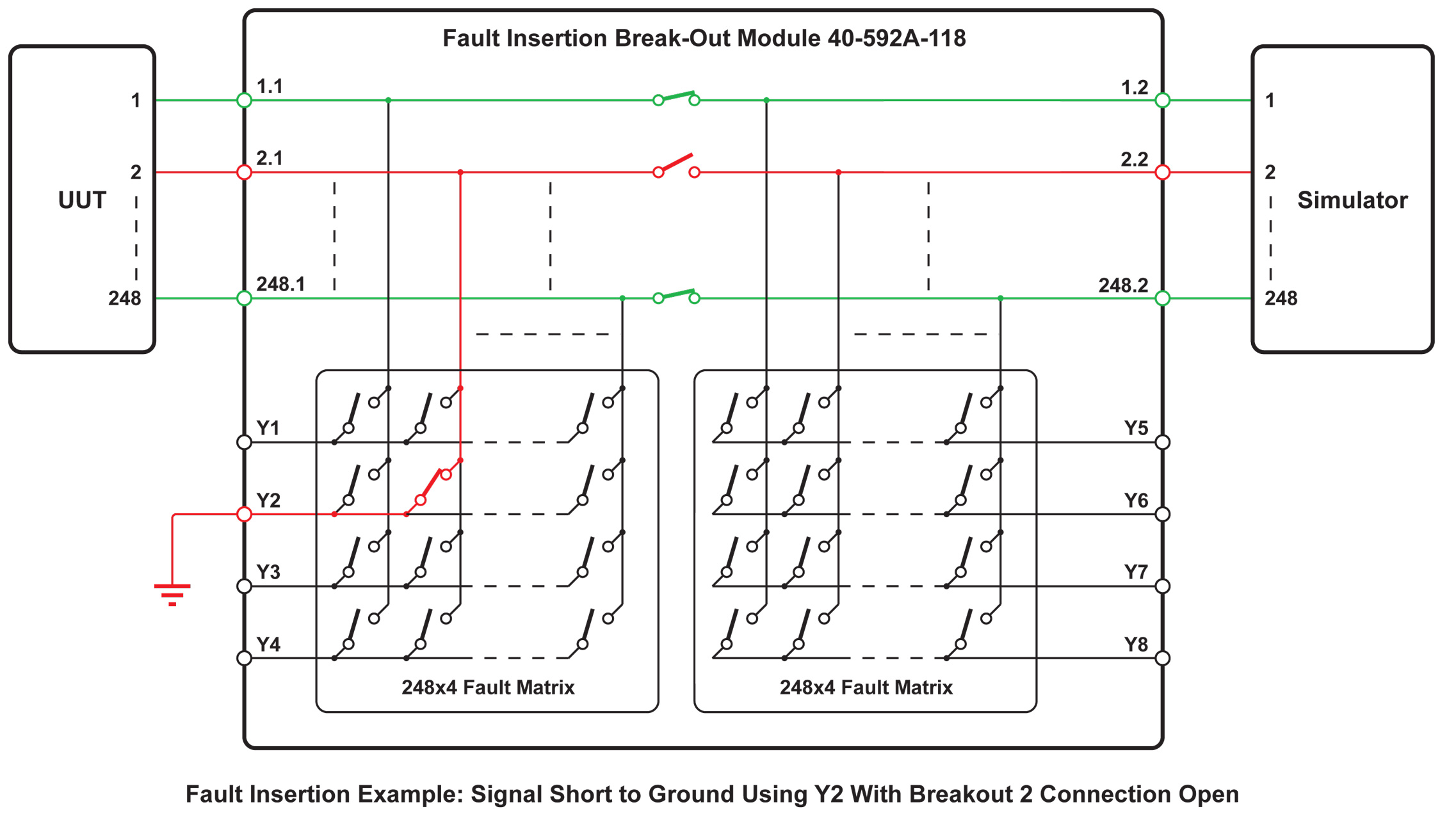 In this example a short is applied to a signal connection on Breakout 2 by applying a ground to Y2. The same can also be done on the other side of the through connection. 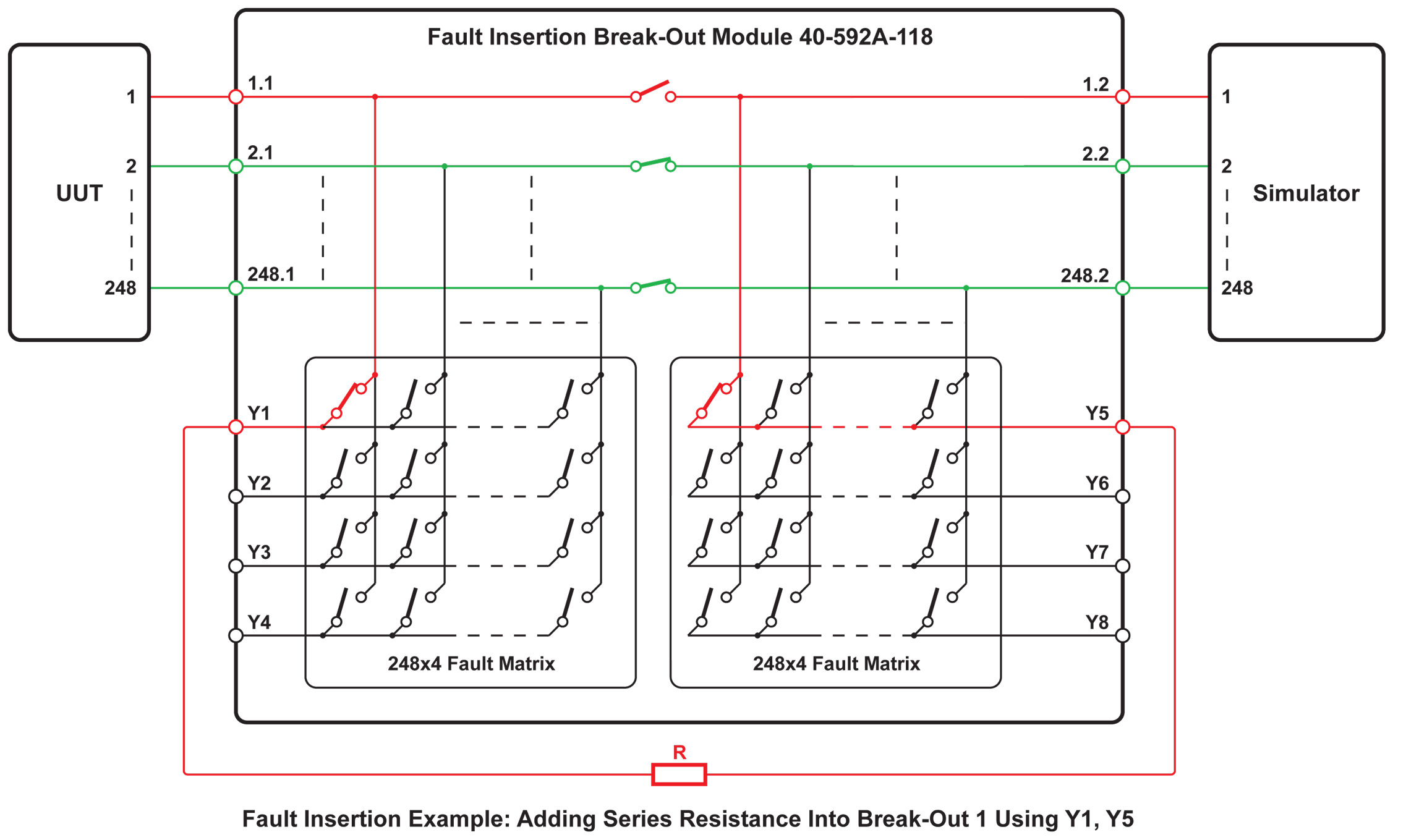 In this example a series resistance is added into a path by opening the through connection and adding a resistor between Y1 and Y5.


On three Breakout versions (shown in these examples) you can also achieve the same effect using the changeover relay as on Breakout 1. 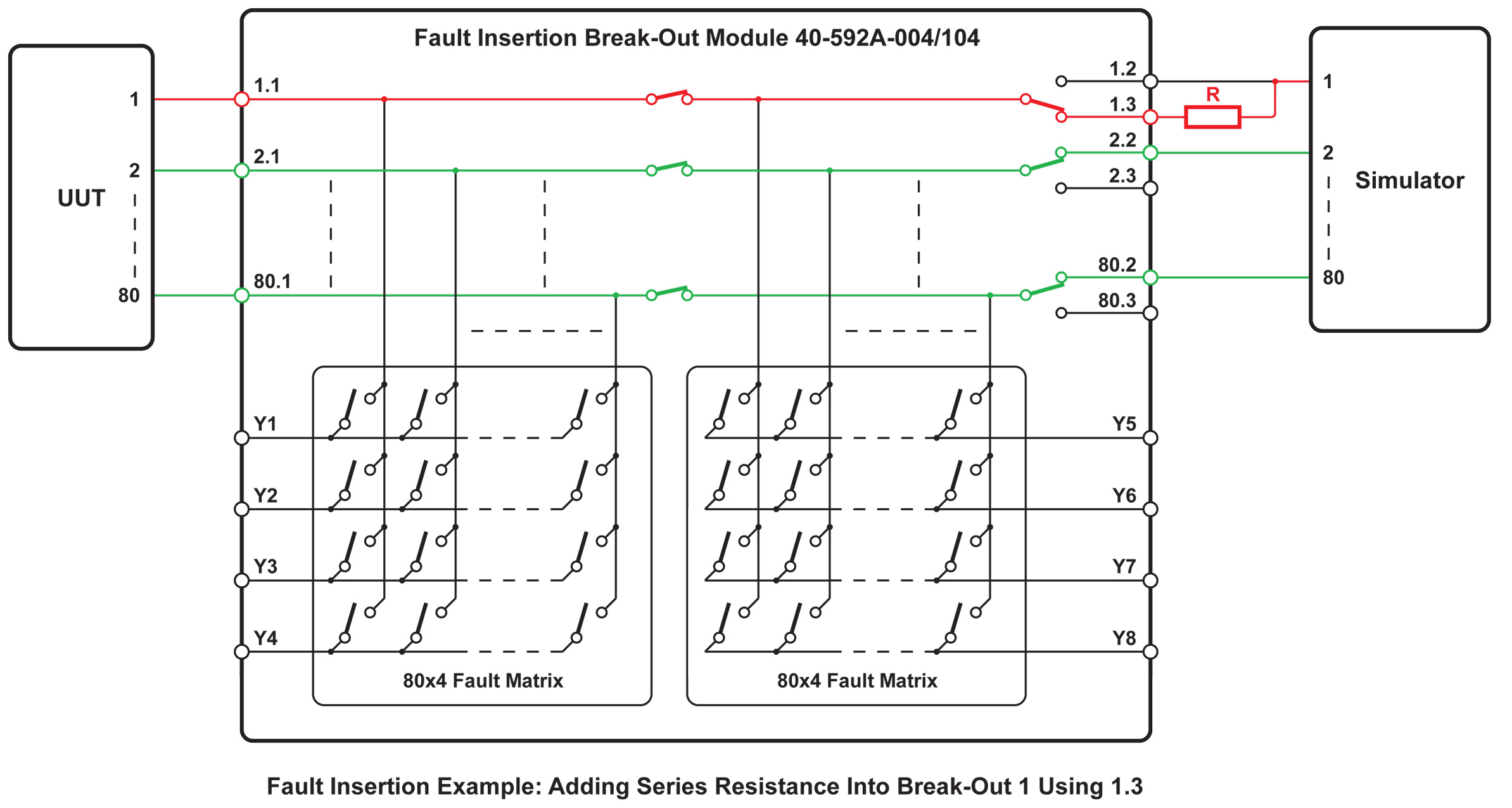 When using the 40-92A and 40-595A Fault Insertion BRIC's the input and output connections (Breakout x.1, x.2, and optionally x.3) share the same connector. We offer custom connections solutions to ease the task of connecting to the UUT and the Simulators so that the input/output connections are on separate connectors to suit the connectors used in the test system. Contact your sales office to inquire about these customized solutions.

The architecture for the BRIC fault insertion matrices allows users to create many types of commonly encountered test scenarios for Fault Insertion applications. Users can even supplement these faults by the addition of further switching on the Y1 to Y8 connections.