SOAP specifies exactly how to encode an HTTP header and an XML file so that a program in one computer can call a program in another computer and pass it information. It also specifies how the called program can return a response.

SOAP was developed by Microsoft, DevelopMentor, and Userland Software and has been proposed as a standard interface to the Internet Engineering Task Force (IETF). It is somewhat similar to the Internet Inter-ORB Protocol (IIOP), a protocol that is part of the Common Object Request Broker Architecture (CORBA). Sun Microsystems' Remote Method Invocation (RMI) is a similar client/server interprogram protocol between programs written in Java.

An advantage of SOAP is that program calls are much more likely to get through firewall servers that screen out requests other than those for known applications (through the designated port mechanism). Since HTTP requests are usually allowed through firewalls, programs using SOAP to communicate can be sure that they can communicate with programs anywhere.

Pickering LXI devices contains two SOAP services (Web services). The first, picoms, is for getting fundamental information about the LXI device and establishing a connection to the device. The second, picards, is for controlling switch cards inside the LXI device. These services are defined in a pair of WSDL (Web Service Description Language) files which may be used to create an interface. The methodology for this process varies from language to language, refer to the SOAP documentation for the language being used.

The following section refers to the use of SOAP from the Perl environment.

Use of the Picoms.pm Package

2. Create an object of type Picoms

3. Set fundamental web service parameters like the endpoint of the service and timeout using the SoapSettings method (default timeout is 10s)

4. Then use the interface

Note that variable $lxi1 is an object, so that you can change fundamental soap setting and you can connect to another LXI device or you can a more similar object in one time if you want.

Using Picards is similar. There is only one important step after step 3): before you call any control functions you have to set the location of the card using function SetCardLocation(bus, slot) because most functions expect card location. After that you can use all functions of Picards package.

The interface is heavily based on the Pickering PXI interfaces pilpxi.dll. However, since Card location is always sent by SOAP header, the parameters CardNum is not used. Another notable difference is that this is a SOAP service, there is no session variable. With the Pickering SOAP interface one doesn't open a card and then control the bits of the card and finally close the card when finished. Instead almost every service's method will open the card, do the command and then close the card.

Almost every function returns an array (except for example ErrorCodeToMessage()). The first item of the array is always retun code (int). If return code is 0 then operation was successful, any other value represents an error. Please see documentation for Client Bridge.

Next item in returned arrays represent values which are returned by function. It can be one value or array or reference to hash. Please, read manual for every function.

You can create your own libraries to cooperate with our soap services and WSDL files are available to assist this process. Our own libraries are based on the SOAP::Lite PERL package.

In general most programs will only need to use Picards, this contains all the card control functions. Picoms concerns itself with communications and card identity functions.

A Pickering switch card presents an interface composed of a series of one or more sub-units. Each sub-unit represents a set of identical input or output objects, usually switches.

Take the example of a 40-677 Multiplexer card. This has two output sub-units, the first a 20 wide multiplexer, the second a single bit wide simple switch.

The driver module interface provides a set of methods to manipulate these sub-units.

The following example uses SharpDevelop, a public domain software development tool for the C# language. It is available from the SourceForge web site, http://sourceforge.net/projects/sharpdevelop.

SOAP is well supported in the .NET framework and creating SOAP applications is very very simple. The following example shows how to create a small C# application which can communicate with our SOAP server. This can be done in one minute, here's how:

(2) Add new web reference (right click on references in Projects view). This action opens dialog. Use the HTTP GET request to get a WSDL file from the Pickering LXI device. For example: http://192.168.10.50/bin/picoms?wsdl.

In WSDL tab you can see the WSDL document of the picoms web service (SOAP service).

(3) Change the reference name to your own name, for example to LxiPiComs and namespace to SOAPTest.LxiPiComs, see picture: 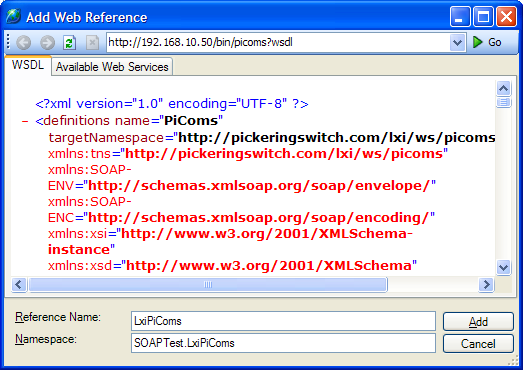 The tab "Available Web Services" shows classes and methods of the web service: 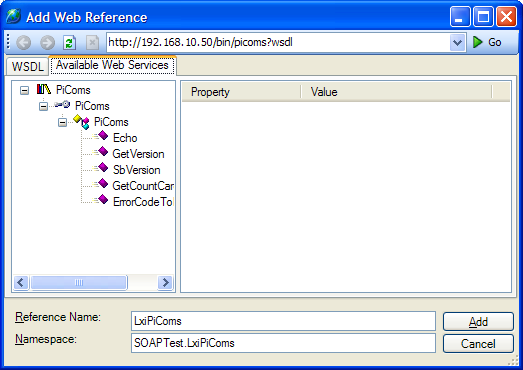 (4) Add this reference to your C# console project. 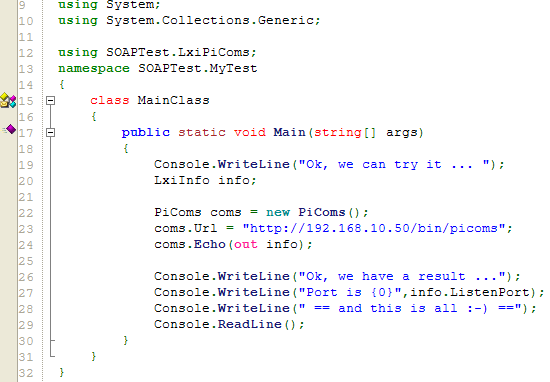 Note: Don't forget set up correct URL to the web service in your source code!

That really is all there is to it