Getting More From the 41-650 Amplifier

The 41-650 PXI voltage amplifier is  capable of providing ±30V signals with 50mA output current capacity. Typically a 41-650 can generate more current than this, but this may elevate the working temperature and eventually lead to thermal shutdown of the channel being loaded.

A better way of providing more current is to use more than one of the five channels available to source the current. Placing channels in parallel allows each to provide a share of the current, this can be implemented either by hard wiring the channels together or by adding a switching network

Below is an example of one way to do this 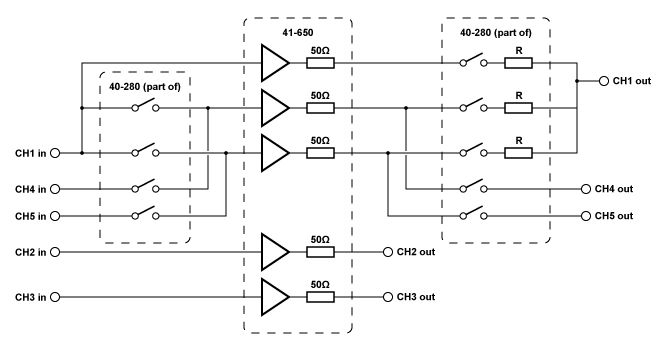 In this example a switching network has been used to optionally connect three channels of the 41-650 together and drive them from a single input signal. The outputs from the 41-650 Channels 1 to 3 can then either be used individually or they can be summed together. The summation process can rely on the 50 ohm internal source resistor of the 41-650, or additional summing resistors can be used.

RF switches could be used if the user wishes to stay with coaxial connectors, but the cost will be higher.

The output impedance of 41-650 is 50 ohms. When three are summed together the output resistance will be 16.7 ohms. This can be increased by adding the resistors (R) to the 40-280 as shown. With the 25 ohm resistors added each channel becomes 75 ohms and the overall system is 25 ohm. Adding 100 ohms resistors will give a 50 ohm output.