The 41-750 Battery Simulator Module is a programmable power supply that is designed to simulate the batteries commonly found in portable consumer (and professional) goods such as mobile phones. It is designed primarily for functional test applications, for example production line testing or to substitute for a battery when the item is placed in an environmental chamber for life and quality testing.

The restricted room available in PXI means the product is not designed to emulate features like output resistance which can be found on bench top battery simulators. Its defining feature is that the battery simulator is a very fast responding device, if the load changes the 41-753 it responds very rapidly to correct the voltage supplied to the load.

The 41-753 will have to use wired connections from its output terminals to the device it is providing power to by means of wires. The recommended method of connection is to use all 4 terminals of the 41-753 to achieve this, two sense lines and two voltage output lines. The output connector of the 41-753 provides two contacts for each of these lines, allowing users to connect two wires for each function to the 41-753 and minimize resistance to the remote device.

The method of connection is shown below; the voltage output is wired to the load, the sense lines "sense" the voltage at the remote point and the 41-753 forces that output to be at the requested voltage. This connection method is commonly used for power supplies to avoid errors created by voltage drops in the connecting wires.

At the point where the sense wires are connected to the voltage output wires the perceived source impedance of the voltage is zero ohms, if the load changes the voltage is corrected so its value remains the same giving the impression of being a zero ohms source. However, this is not true if the load is changing rapidly. The feedback system takes time to operate so this is a simulated zero output resistance that is only valid for static or slowly changing loads. If the load is dynamically changing value, for example because of transmission bursts generated on a cellular phone, then the situation is more complex.

The data sheet for the 41-750 shows the dynamic response of the module under a pulsed load, one that changes from 1A to 2A in a very short time interval. 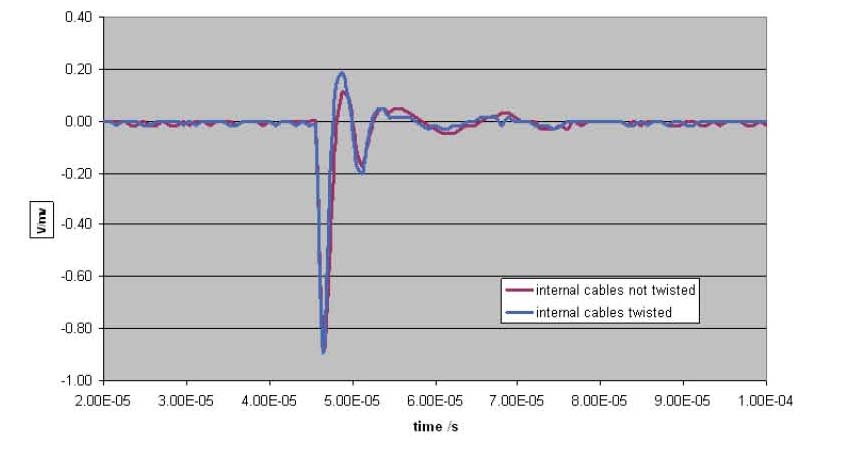 41-750 Transient Response, 1A to 2A transient load, 10uS per divsion horizontal, 200mV per division vertical

Initially the load voltage is at the requested value, then a change in load of 1A occurs. If the lead resistance of the connection is 800mohm (the sum of the resistance in both the V+ and V- leads) then the load voltage will immediately drop by 800mV. The 41-753 senses the voltage change and then corrects this by increasing the output voltage by 800mV, most of the correction is achieved in 5us, a ring then allows the output voltage to settle from the last 200mV error to a very small value over the next 10us. This is a VERY fast transient response, much faster than that achieved by conventional power supplies or even bench battery simulators.

The transient response is unavoidable, it is a direct consequence of a load current change and a finite feedback bandwidth.
To minimize the transient voltage at the remote load users need to reduce its effect by two means:

The current sink on the 41-753 is to provided to allow the battery simulator to sink current in the same way as a battery does when it is being charged. The current sink however can effect the way the 41-753 transient response appears when a current load is removed. If the current load is removed then the load can have a positive voltage excursion which can charge any load capacitors, if the residual load on the battery simulator is very low then this can leave a higher load voltage which is then gradually discharged by the internal load in the 41-753, about 10mA. The load can be increased by engaging the current sink, ensuring any voltage is rapidly discharged, and the smaller the load capacitor the quicker the discharge occurs.

The load transients under changing load conditions can be effectively managed by ensuring the output voltage connection resistance and the load capacitance. For 41-753 there are no conditions under which a load of more than 220uF is required, and we recommend keeping the resistance of the connection to the load to less than 500 mohm.