Arbitrary Waveforms on the 41-620 Function Generator

The 41-620 is primarily a function generator for the generation of sine, square and triangle waveforms. However it contains basic Arbitrary Waveform Generator (ARB) functionality which may be useful as a cheaper alternative to a full ARB product.

Waveforms are generated by the user and passed to the 41-620 driver in a file. This file may be a text file which may be easily generated in a text editor or spreadsheet, or a binary file generated by other means. This article confines itself to text file waveform generation.

The waveform is defined as a series of voltage levels placed in equi-sized time segments, the 41-620 will repeatedly cycle though the data in the file, setting the output voltage level for each time segment to the level defined in the data.

There are 2 types of file that may contain the output level data, binary or text, here we consider the text file format.

Due to the nature of the card design, the waveform data must be comprise a number of entries which is a power of 2, minimum 8 points. So, 8, 16, 32, 64 128 etc data points must be present, any other number of entries will cause an error when the file is loaded.

So, a file containing 8 levels thus: Will generate: 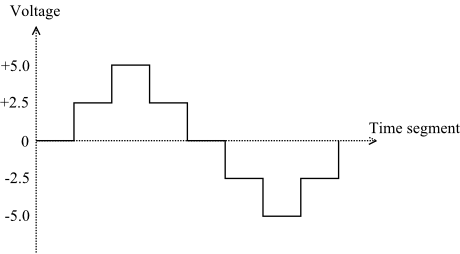 And data points : Will generate:

The option 'normalize' will re-scale the input data points to fill the entire 100% range, so loading the second data file with normalize will generate the full amplitude signal as in the first example.