Relays can be easily overloaded when closed (or opened) because of excess current or power. All relays have a current limit and a maximum hot switch power, exceeding this limit risks the contacts welding together and either failing to release or taking a long time to release.

There are particularly problems where power supplies are involved because these include capacitors in their outputs which may cause high discharge currents to flow, which in turn heat the contact materials and potentially melt the metals so when they cool they weld the contacts together.

The addition of current limiters can mitigate some of these problems but it should be remembered that current limits on power supplies cannot control capacitive discharge effects, and they may take time to operate since the limiter works on a feedback loop which is part of the power supply control system

In some cases digital I/O cards like our models 40-411, 40-412 and 40-413 can be used to reduce the incidence of welds, especially in cases where the incidents are caused by faulty test targets. To show how the digital I/O modules can help this page will use a fault insertion module as an example, but the same principal can be applied to many other systems. 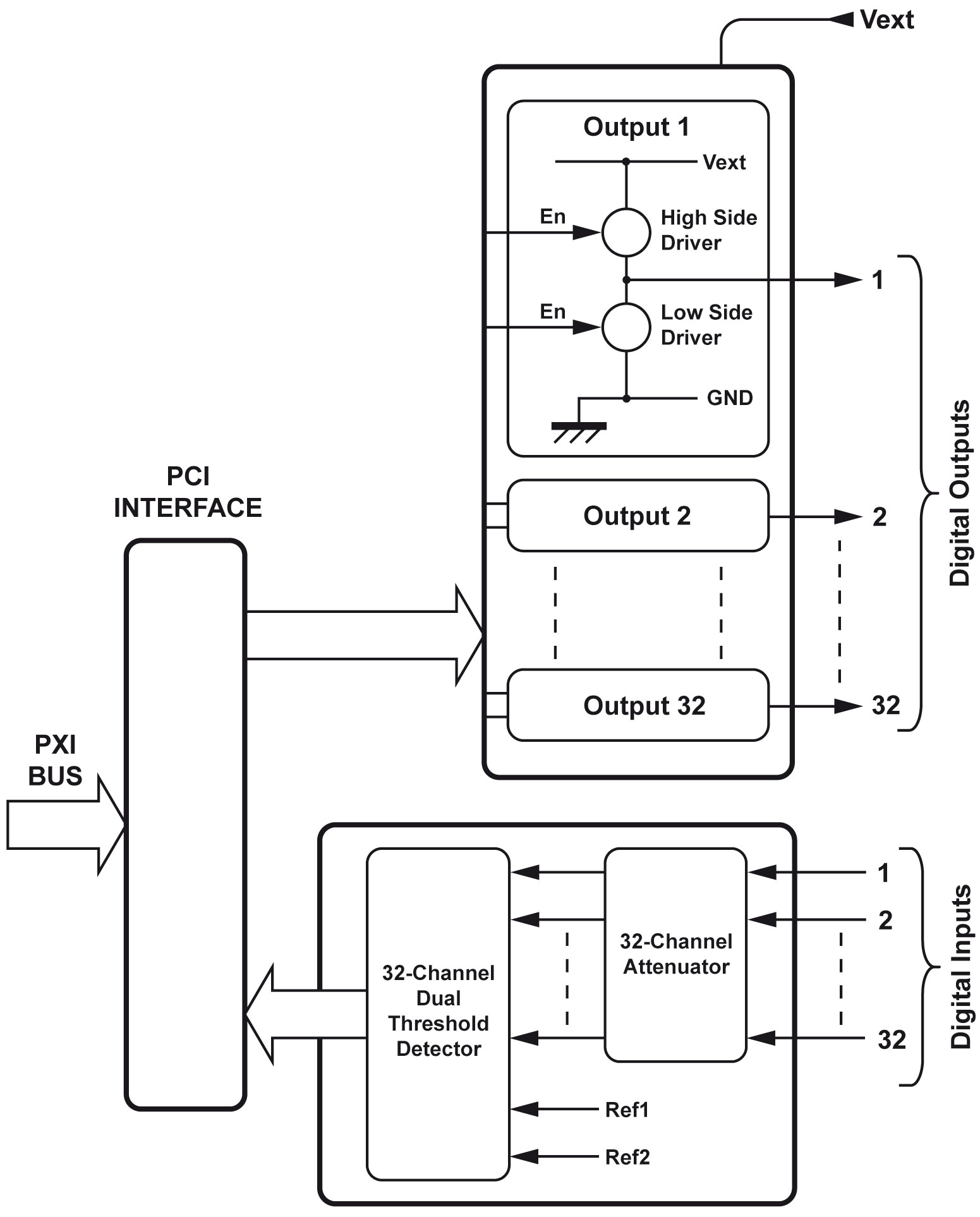 Where the digital I/O module includes both source and sink drivers both drivers can be set to the off state, or one only driver used to connect to the positive supply or ground.

Where the high side driver is used it should be noted that it includes a forward biased diode when switched on which means there is a voltage drop across the driver above that expected from its output resistance. 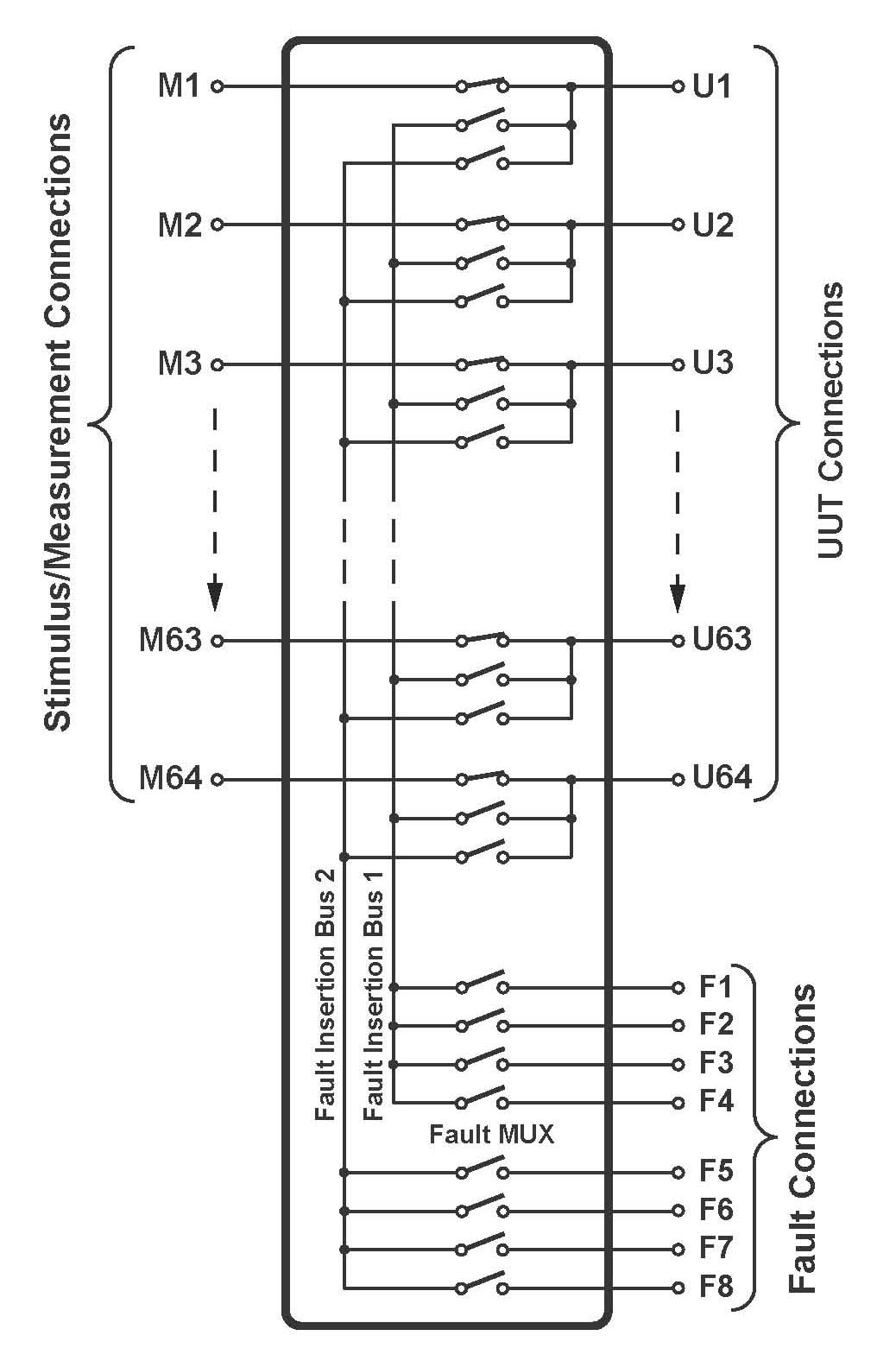 Fault Insertion (FI) modules made by Pickering Interfaces are designed to simulate common faults that might be found in a safety sensitive systems. They simulate open circuits and short circuits, and a common requirement for short circuit simulation is to short to either another signal line or to a power supply/ground. The latter could produce quite high current flows, especially if the test device itself has a fault. The relay has to be chosen to handle the likely currents but in some cases finding a relay that can sustain the absolute worst case current heavily penalizes both the density and the cost. Take a look at this page showing architectures of Pickering Interfaces FI modules.

For connections that are routing a fault to power or ground users can use a digital I/O modules to provide the connection and in doing so providing a current limit function to help protect the relays. They can also use the digital I/O module to make the FI relay cold switch rather than hot switch.

A typical architecture for a FI module is shown above, in this case a design that has the potential for multiple fault sources. One or more of these fault sources could be a power supply (battery) or ground. If this connection is made indirectly via a digital I/O card then the digital card I/O will provide a current limiting function.

If the digital I/O module is a 40-411 it only provides connections to ground, and it can only drive connections which come from a positive signal source. If the signal direction is reversed then the 40-411 will clamp the signal at roughly 0.6V below ground because of the presence of clamp diode in the output. The 40-411 is rated to sink a current of 1A, it will current limit at typically 1.5A provided the voltage involved is is above +3.5V, for lower voltages it will clamp at a higher current, the worst case being approximately 3.5A while the voltage is held at 1.5V

A 40-413 provides similar functionality to the 40-412 but at higher current, in this case the current limits at typically 7A on the low side drivers and 3.5A on the high side driver. This module is unsuited for protecting 2A relay designs but can support higher current FI designs.

In each case it is possible to increase the current limits by placing more than one channel of digital I/O in parallel.

In each case the user can also elect to switch the path by operating the digital I/O switch rather than the relay. Simply close the FI insertion relay before the digital I/O modules closes the path to ground or positive power supply. This will significantly increase the relay lifetime on the fault insertion module because the switching event for the relay becomes a cold switch rather than a hot switch.

In all cases users should make sure the digital I/O modules voltage ratings are not exceeded.

The use of the digital I/O for protecting relays is not limited to FI, it can be used anywhere where a relay is connecting to ground or to a power supply.