Many of Pickering Interfaces products are offered with a choice of RF connector, for an opinion on the different connectors types and their relevance to PXI and LXI switching solution just read on.

This small connector is generally specified to a frequency of 4 GHz and is a good solution for 3GHz PXI modules in particular since it allows a high connector density on the front panel of a PXI module. The snap on nature of the connector means that spanner access is not an issue. It is very commonly used and often off the shelf cable assemblies can be purchased form distribution stock.

As the connector is small it most suitable for use with relatively thin coaxial cables, which can increase losses at higher operating frequencies compared to larger connectors. It is available in both 50 and 75 ohm impedances.

It should be noted that SMB connector gender is sometimes confusing, the general convention on RF connectors is that the inner contact determines the gender, with the male contact being referenced as the plug. In the case of SMB connectors the convention is different, the male inner contact is referenced as a socket. This can cause confusion with users when ordering parts to interface to RF switching systems.

This connector has a similar internal interface size to SMB but offers better RF performance, has a smaller external size and is specified to 6GHz. It uses a snap on interface, again requiring no spanner access. Although not as commonly seen as SMB connectors it is a superior option and is widely supported by the cable assembly manufacturers. Many of Pickering Interfaces more recently introduced switches offer an alternative of SMB or MCX connectors using a common PCB design.

It is available as either a 50 and 75 ohm impedance. 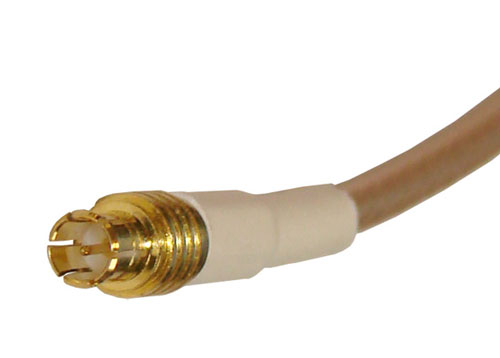 It is only available in 50 ohms.

The QMA connector uses a similar interface to the SMA but uses a snap lock interface - the connector snaps on and then cannot be released until the barrel is pulled back. Accidental loosening or disconnection of a mating cable is almost impossible. The connector is usable to 18 GHz but generally best specified up to 6GHz. The connector was specifically developed for Telecommunications requirements, small cellular systems and Wi Fi applications where a high performance tool free connection is considered important.

It is only available in 50 ohms.

The Type N connector is popular on bench instruments because the interface is large and robust, allowing it to connect to larger low loss cables. However, it is generally considered to be too large for successful deployment in PXI.

This is the preferred connector for broadcast applications and is widely used. Although often quoted for use to 2 GHz the connector is often only suited to 1GHz - many F Type connector designs in reality have a very poor transmission line impedance (55 ohm is not uncommon) which leads to a significant VSWR degradation.

It is only available in 75 ohms and should only be used where there is no other option.

This type of connector is manufactured by Positronics, Souriau and others. A connector block accepts a number of coaxial connections using proprietary connectors. The connectors pack a relatively large number of connections in a small amount of front panel space so it is a solution used where a dense interconnect is required. It also allows the quick connection of of multiple coaxial connections. The connectors used are very small and use crimp style terminations. The construction severely limits the bandwidth of connection - for example the 40-755 is a 2 GHz switch design but when the multipole connector solution is used Pickering Interfaces suggests the maximum usable frequency before the VSWR rises above 1.5 is 500MHz.