Pickering Interfaces RF product data sheets contain real plots taken from sample products. The information supplied in the plots is intended to help users anticipate the impact on the imperfections on an RF system.
On this page we examine the crosstalk and isolation plots.
We have used the 40-876 terminated multiplexer as the example. However, the principals apply to any RF device. The same principles can be applied to non RF products but in general these are supplied with specification at spot frequencies rather than as plots.

How are the plots created?

We use a vector network analyzer (VNA) to create the plots. Before performing measurements we calibrate the network using a calibration kit and a set of test leads. The calibration process normalizes the RF measurements so that it reflects the performance of the switch as measured at the input and output connectors. The plots therefore include errors due to the module connectors, but not the characteristics of the mating connector or the connection cables. This is normal practice for measuring RF devices.
All the example plots were generated using an Keysight (formerly Agilent) 8.5GHz VNA with an LXI interface.

The VNA is used to measure the S parameters of the switch. More information on S parameters can be found on Wikipedia http://en.wikipedia.org/wiki/S-parameters.
S parameters model a device on how power flows into and out of the device terminals in a defined transmission line system. For the example used here, 40-876, the system is 50 Ohms so all the references are to that impedance. For 75 Ohm systems we use impedance adapters to perform the same measurements and calibrate the VNA accordingly.

The two terms can be confusing and for some products there is a great deal of ambiguity in their use.

Taking the example of the 40-876 we have three plots shown which show interaction between the signal paths. 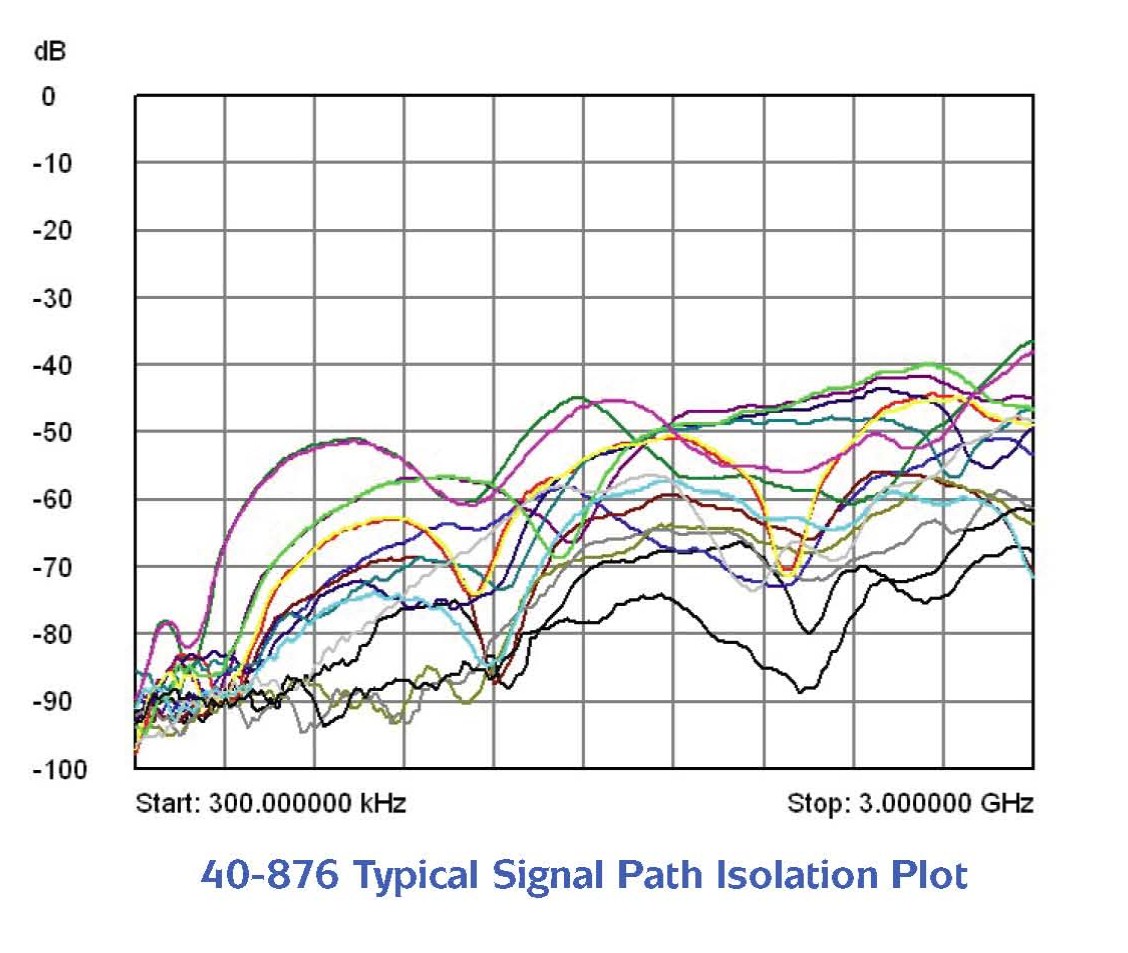 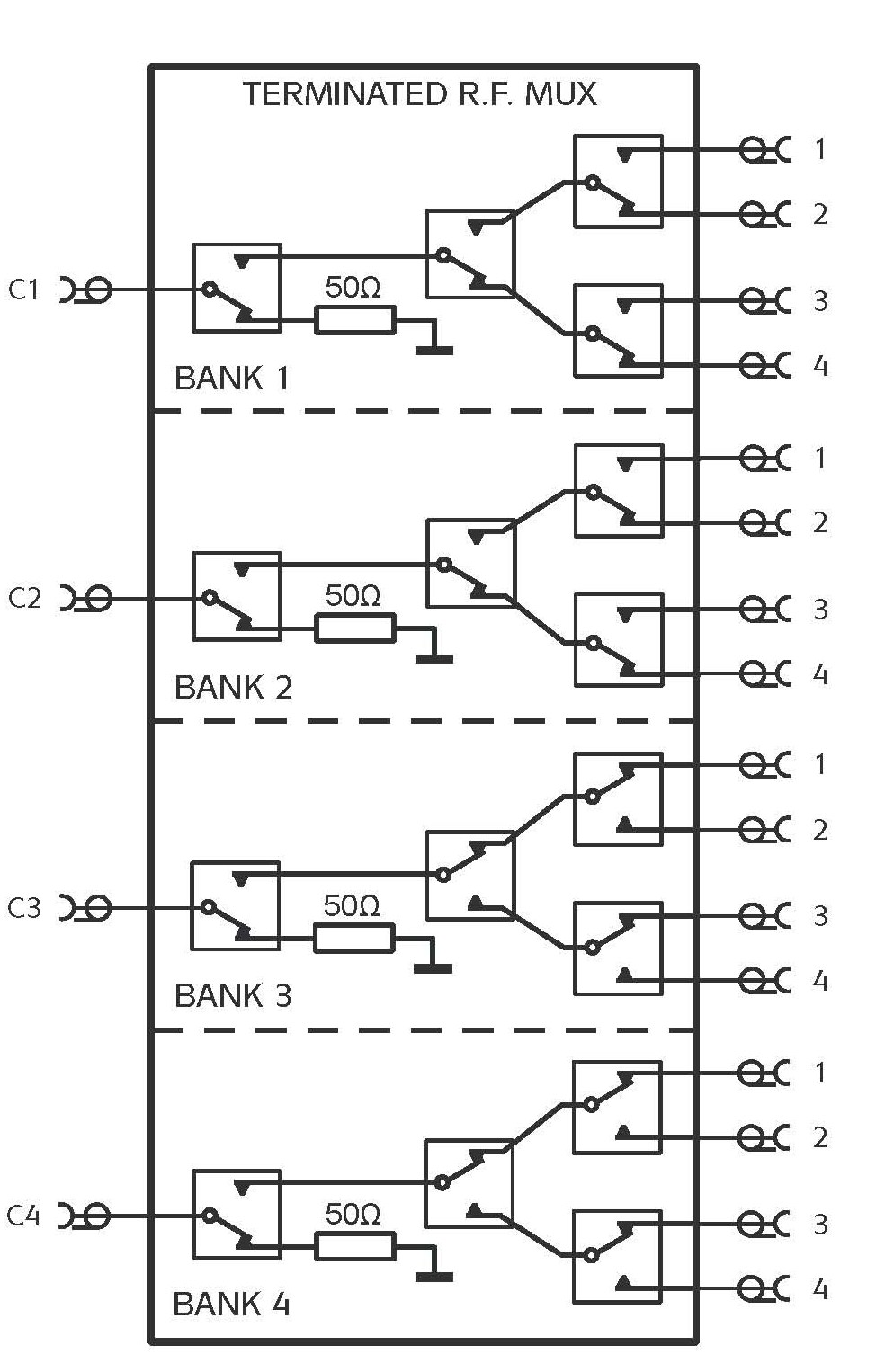 The isolation plot is taken with a single MUX and the VNA connected to the common and one of the output ports. The Common is switched to the terminated position and the VNA used to measure the residual signal through the switch. The switches, other than the input termination switch, are set to select the path being measured, so if the path is the common to port 4 the remaining switches are in the default position shown. 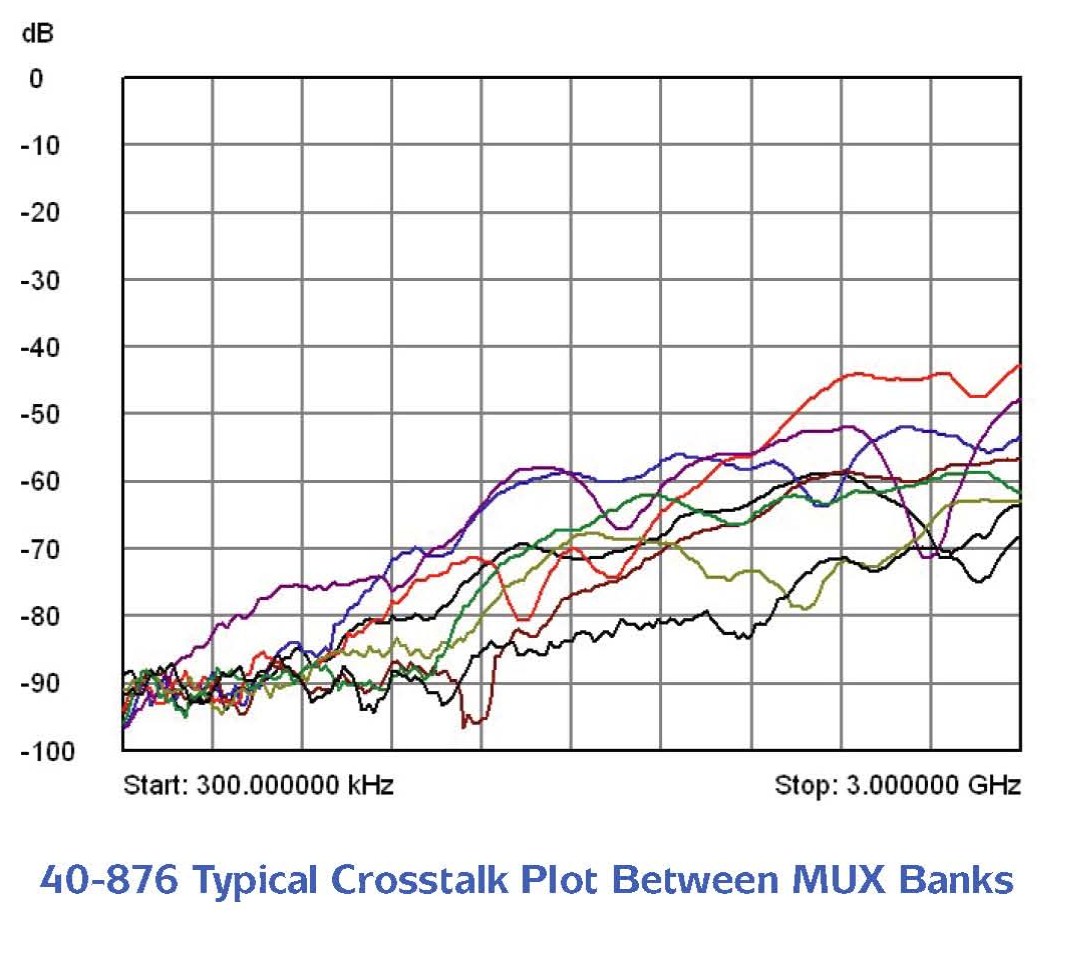 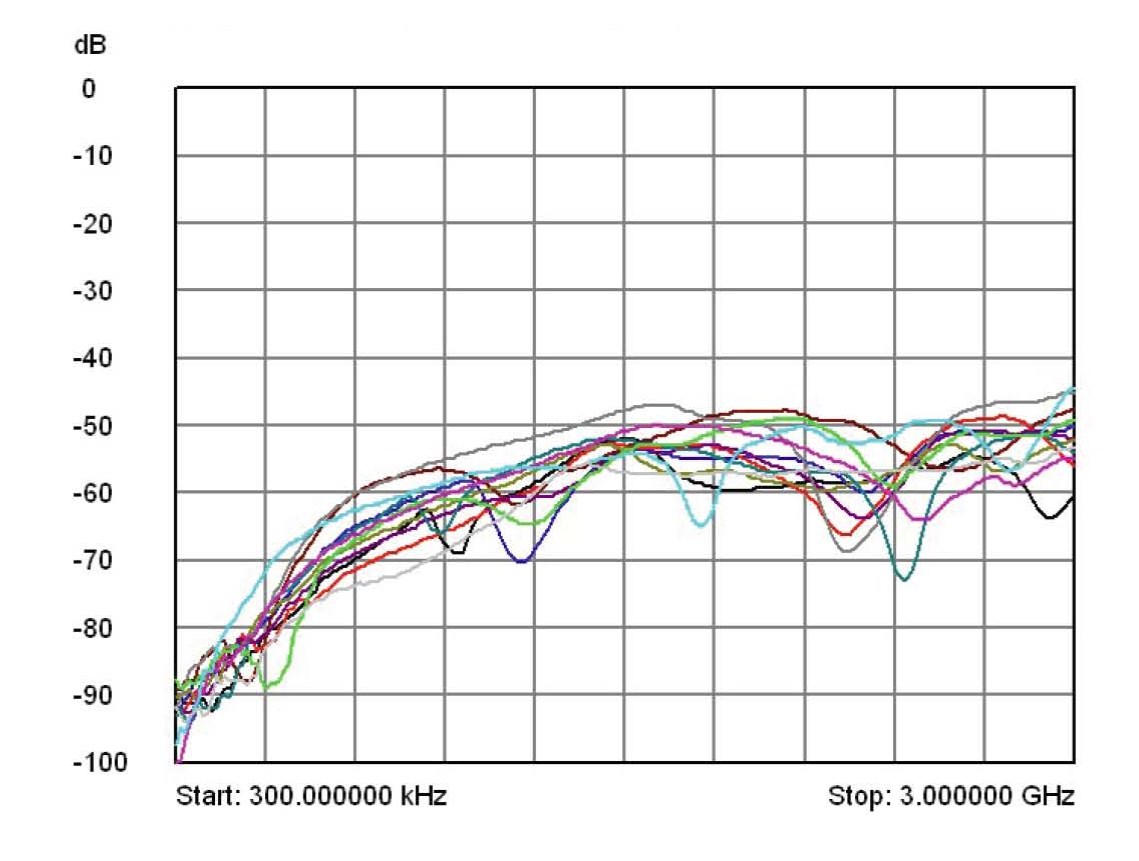 40-876 Crosstalk between ports in the same MUX bank


The first crosstalk path is where the VNA output is used to drive one of the MUX's commons (for example C1) with the selected output port terminated. The VNA is then used to measure the signal on the output of a different MUX. In this case there are numerous different paths possible, so a selection of paths is provided which are representative of the scatter. The plots for all products always show the worst measured path on a sample product.

The second crosstalk plot shows crosstalk between ports on the same MUX. The VNA is connected to the common and the other port connected to one of the signal outputs. The switch is set to connect the common to a any of the other ports with a termination in place. Again a selection of plots is provided since there are many possible combinations. Again the worst plot on the sample is always shown.

In the case of matrix applications the difference between crosstalk and isolation is generally clearer. In a matrix the isolation is simply the signal level change when a path is disconnected compared to when it is closed, the crosstalk is the coupling of a closed interferer path (source) to a closed victim path. We always quote the worst channel found, most channels will be much better than this.

Impact of Crosstalk and Isolation

The impact of crosstalk and isolation is very variable on test systems. In some applications it barely matters at all.
An example is the bulk testing of RF products, for example mobile phones, where a bank of phones are sequentially tested but typically only one phone is enabled at a time. Since the phones not being tested do not generate signals then crosstalk and isolation are not significant issues. A second example is where the products under test use different frequencies or different time slots to transmit their frequencies. If the measuring device is either frequency selective or time selective high crosstalk and isolation numbers might not be required.

In other applications though the signals may all be present and that might require high isolation and crosstalk numbers. If for example a 4 input MUX is being used and signals at the same frequency and level are present on each input then the selected channel will see interfering signals from the 3 other channels. Assuming these signals are not correlated (usually the case) then as a rough guide the signals will add on a power (root mean square) basis. So two equal interfering signals from two ports with the same crosstalk numbers will raise the interference by 3dB compared to a single interferer.

For large multiplexers (or matrices) this can significantly raise the interfering signal levels and so require higher isolation or crosstalk numbers.
Applications where the signal levels involved are very different on different ports can create a need for high crosstalk performance. For example if one signals (interferer) is at +13dBm and the victim channel is at -17dBm then the interferer is 30dB above the victim channel level and the application may demand a crosstalk/isolation 30dB better than the signal to interferer ratio.

Each application has to be judged on its circumstances and an appropriate choice of switch made. Higher isolation and crosstalk performance generally requires either less dense solutions or more extensive screening components, both of which lead to the normally engineering trade offs of cost and performance.

In some applications choosing an appropriate signal level can reduce the required crosstalk and isolation numbers by ensuring that signals fall below the noise floor of the receiving device.

Alternatively the switch requirements can be eased if the devices under test have a power control mechanism that reduces the signal levels on the paths not selected for measurement.

Every application is different, but the provision of a selection a real measured plots in module data sheets makes the engineer's selection task much easier.

Impact of Impedance on Crosstalk and Isolation

Crosstalk and isolation are measured in impedance controlled conditions, usually 50 Ohms. For many designs, especially low frequencies ones, the main cause of crosstalk is capacitive coupling between tracks or relay contacts. A side effect of this is that if the connections are working with higher source and load impedances the performance is likely to be worse. As a rough guide it might be expected to get worse by roughly 6dB for every doubling of the impedance. So if the source and load is raised from 50 Ohms to 600 Ohms then the performance will degrade by a little over 20dB.