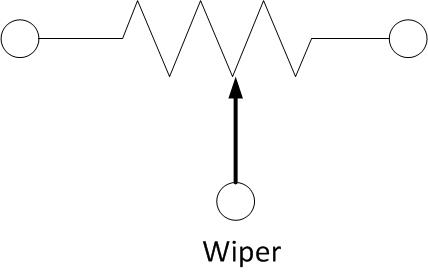 A potentiometer is a variable resistance device where the resistance between two end contacts is fixed and a wiper provides a tapping point part way between the two contacts.

They are used in a variety of applications, for example making adjustments to a parameter or to emulate a variable control.


Emulation of the potentiometer requires the use of two separate variable resistor channels connected in series. For a Pickering Interfaces resistor module these will both need to be a variable resistor channels that have a maximum resistance that is greater than the resistance of the potentiometer to be emulated.. The user software needs to control the two channels so that the sum of the two channels is always the same value (e.g. 10 kOhm).

The 40-296 is based on the 40-295 and offers a configuration where two resistor channels are wired together to emulate a potentiometer. In general we suggest that users choose 40-297 or 40-295 (or PCI equivalents 50-297 and 50-295) in preference since the same functionality can be achieved by the user wiring the channels together externally and having the freedom to reconfigure to separate channels for other applications, or to mix potentiometer and variable resistor channels in the same module.