The two most basic solutions for a MUX are based on a Tree Architecture and a Conventional Architecture. Pole switched MUX's offer much the same characteristics as conventional MUX's but make good use of two pole (often EMR) relays. Each method of construction has its own advantages and disadvantages. 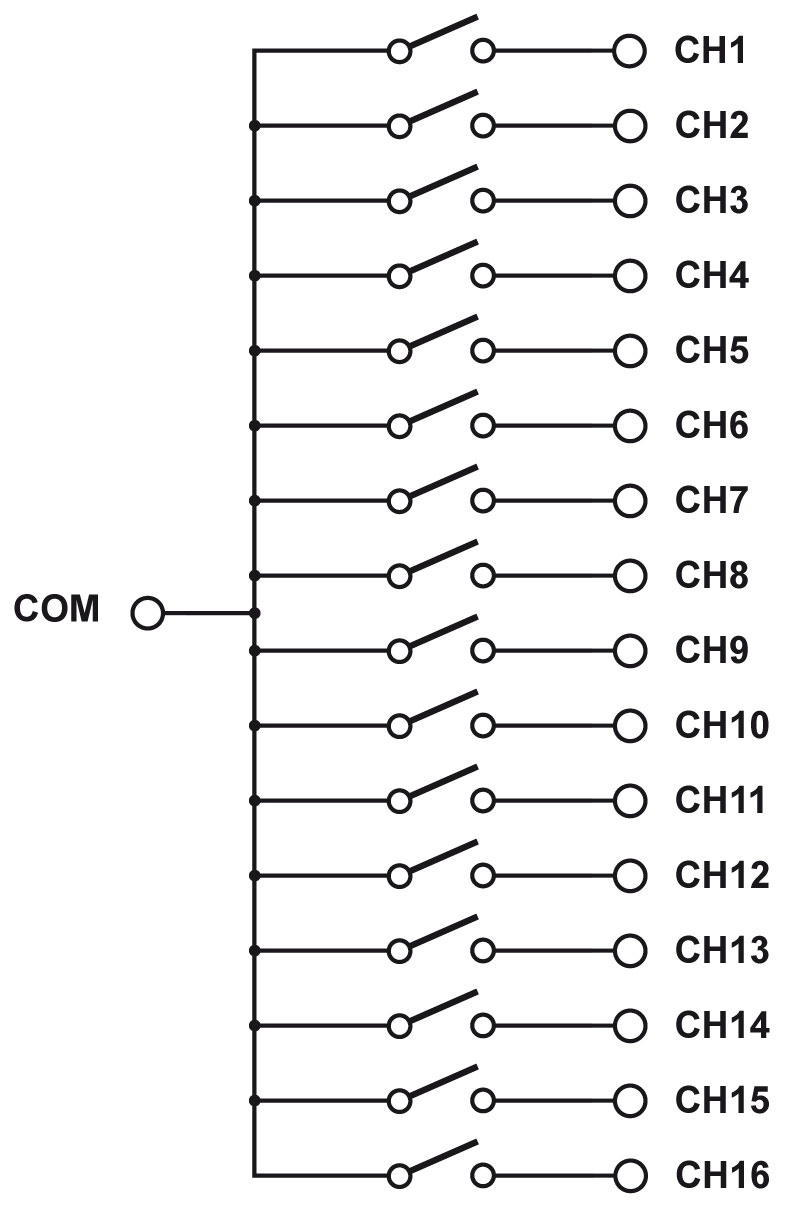 In a conventional MUX a Common connection is used as the input (or output if the MUX is used to de-multiplex) and is connected to a variety of different paths via relays. All relay based MUX's can be operated as De-multiplexer - means of connecting one a many signals to a single test port as opposed to a means of sending a single signal to one of many test ports.

The BW of such a MUX is inherently limited by the number of relays it has connected to the common and by the length of the tracks that connect to the relays. For designs using mechanical relays the dominant limitation is the tracking (capacitive loading), for solid state designs it can be the relays. Both these defects tend to cause the Common to be loaded with excess capacitance, and transmission line effects on long connections can transform an open connection to a short at the Common at the quarter wavelength point resulting in frequencies with very high insertion loss.

Apart from the BW limitation this approach is highly cost effective and produces the lowest DC path resistance since only one relay has to be closed to connect the signal. The architecture also allows more than one path to be connected (subject to any driver imposed limitations) to the common. In software terminology to distinguish a MUX that permits multiple closures Pickering refer to them as MUX M - in a MUX M multiple closures of relays are permitted, in a MUX only one closure is permitted.

An isolation relay in the common also allows the MUX to be used to connect output connections together while leaving them disconnected from the Common if the driver permits it.

If an isolation relay is included in the Common it makes the switch entirely symmetric - all ports connect to an internal star point and the difference between a Common and a channel output is purely a notation convention. The isolation relay reduces the capacitive loading on an external wire connection when the MUX is not in use.

Ensuring that a MUX performs a break before make has to be a function of the driver, requiring two setting operations of the MUX.

A potential disadvantage with a conventional MUX is that in the event that a relay welds then subsequent relay closures can connect parts together in the test system that are not intended to be connected.

For the 198 channel MUX shown 99 two pole relays provide the 198 output connections and two relays select which of the poles is actually connected to the common. This uses fewer relays than would be used in a design where the relays are single pole.

This is a cost effective approach where users do not require multiple outputs to be connected together. The issues on BW and other factors are fundamentally the same as for a conventional MUX. 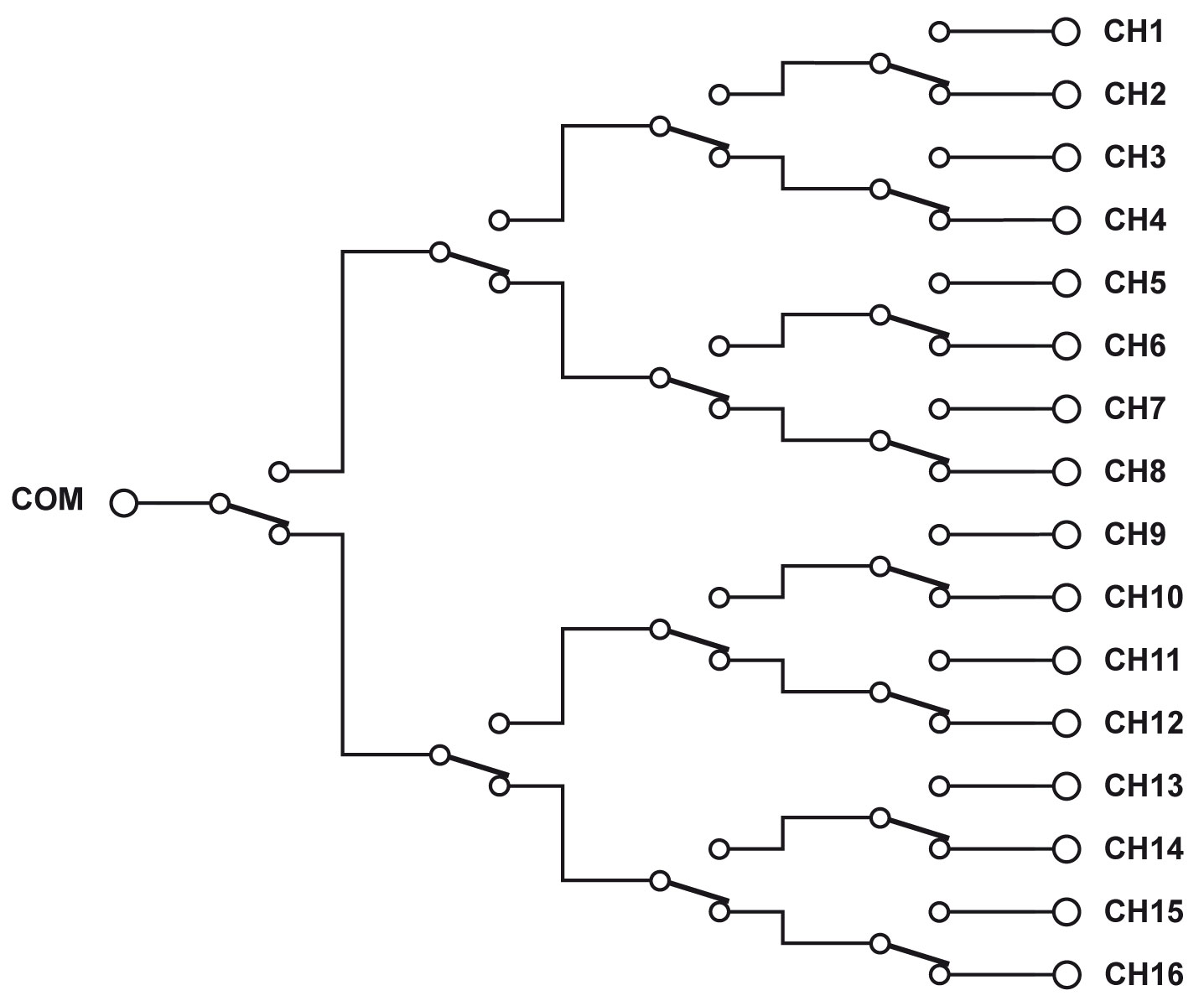 A Tree MUX connects a common to a set of output (or input) connections using SPDT relays. The signal is switched using a tree structure to expand the number of output connections supported. Since the relay is used to select which of two paths is closed the MUX only permits one overall path to be selected, and there is no possibility of unintentionally connecting output connections together.

However, the MUX BW is considerably higher since the paths do not have open circuit traces or other relays connected to them that create transmission line stubs, so they have the best possible BW that the relays can provide.

Tree MUX's are often used as part of RF matrices in order to provide wide RF BW Tree and Crosspoint Matrices, at no point are there excess tracks connected to the RF path which minimises excess capacitive. A second use is in power systems where the input is to only be connected to one output, even in the event of a relay weld. As the MUX is created from changeover switches a welded relay inherently prevents an additional path from being connected.

Use a conventional MUX for low frequency applications since it provides the lowest cost and best performance in terms of path resistance. Use a Tree MUX for applications where BW is critical and beyond the capability of a conventional MUX or where it is essential to avoid multiple closures that might allow outputs to be connected together..