General purpose switching refers to a class of switching architectures constructed from individual relays. Users can interconnect these relays to form standard structures such as MUX's or matrices to their own architecture or simply be used to switch individual signal lines. They are relatively expensive and sometimes low performance when used to create larger standard switching architectures - principally because the density is low due to the high connector pin usage and the need to wire the relays together externally.

However, that also allows them to be very flexible, especially when used with external interconnection systems like mass interconnect solutions that allow the system to be reconfigured for different applications. For this reason they can be popular on test systems designed to support a diverse array of products where it is important to minimize the number of test systems required.

Single Pole Single Throw (SPST) switches have a single input and single output connection. The relay is either open or closed. The most common (and considered the most reliable on reed relays) configuration is where the relay is open when the switching system is not powered or is in its default state.

Some applications prefer to use a default state of closed, for example applications involving Fault Insertion, since through connections is maintained even if the switch is reset or becomes disconnected form power. 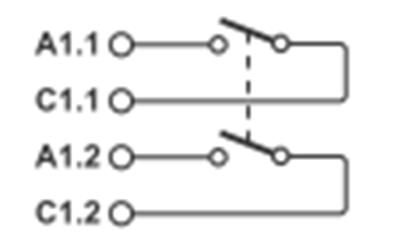 Double Pole Single Throw (DPST) switches have a pair of input and output connections. The two relay paths are either open or closed, if one rely is open then so is the second so the drawing shows a dotted line to indicate the two sets of paths state are linked. As with the SPST the most common default (unpowered) state is to be open but normally closed versions are available.

Although operated from a common actuator in the event that one contact welds it does not prevent the other contact from moving (though the mechanical arrangement result in degraded operation on the second pole in the event of a weld on the first).

"Pole" generally refers to the number of independent (electrically isolated) connections that are supported. Relays can be conveniently constructed to have two poles (many EMR's are supplied with two poles, reed relays use two reeds operated by the same coil). If more than two poles are required the most common solution is to use a number of separate relays operated by coil drives that are either common (one control line operating several relays) or are logically grouped together (the driver groups several control lines together as one control function).

Not commonly used in general purpose applications because of their larger size and higher cost, safety relays are designed so that if one contact welds then other contacts cannot change their position. This allows the other contacts to be used to check is=f a relay has welded by monitoring the state of one of the other contacts. Some versions of safety relays offer more than teo poles to support this type of use.

Transfer switches are usually only implemented in microwave switching systems. They are four terminal devices with two inputs and two outputs where one input can be connected to either of the outputs and the second input is then connected to other output. When implemented in microwave relays can be a default "all open" position where none of the connections are made.