There are two common ways of implementing a matrix, and many ways of then using a combination of these methods, to implement a matrix. Often it is not clear whether a matrix is implement using tree MUX's or by a crosspoint arrangement since the functional diagram used almost invariably shows a crosspoint drawing to simply describe the functionality of the matrix. The driver supplied with the product also hides the complexity of the hardware from the user to make it easier to program.

In a crosspoint solution a set of tracks is used to connect the Y axis to the X axis through a set of relays at each intersection. This is a simple arrangement to understand and is relatively easy to layout, it also gives great flexibility in what connections are permitted. However, for high frequency applications it may be unsuited because of the BW restrictions is places on the matrix.

In the above example if Y1 is connected by the relay to X1 then the red track is a stub (an un-terminated transmission line). At low frequencies the stub will add capacitance to the connections so will tend to restrict the highest frequency that can be used without introducing excessive loss. The track also forms a transmission line, and when the transmission line is a quarter of a wavelength long the open circuit at the far end is transformed to a short circuit at the connecting relay - effectively causing a very high path loss in the matrix.

The length of the added stubs depend on which path is selected, for example as shown a path Y1 to X4 has no excess track on the functional drawing so does not suffer from this effect. However, even this path is not free of defects since the relays at each intersection introduce parasitic capacitance (or short stubs) again causing a loss in signal level. The loss may also be dependent on what is connected to those other relay connections.

Other paths will have more than one stub connection, for example Y2 to X2 clearly has track stubs on both the Y and the X tracks. On large matrices these can be very long.

PCB tracking also typically does not get designed as a transmission line with a specific impedance on crosspoint matrices, instead the tracks are designed around the carry current and the voltage rating of the switching system. Typical crosspoint matrices tend to have rather a low transmission line impedance because of the dense tracking used - PCB layer count can be high and therefore each layer quite thin.

The layout also may not follow the simple arrangement shown on the functional diagram, for example the path Y1 to X4 may not be the furthest point in the tracking.

Crosspoint switches of this type are ideal for low frequency applications where the BW is not critical. It is a very cost effective solution with few user restrictions, for example it offers complete freedom on making X to X connections or Y to Y connections as well as X to Y. It is well suited to applications where a connection form X to X is used to connect the instrumentation to the UUT. 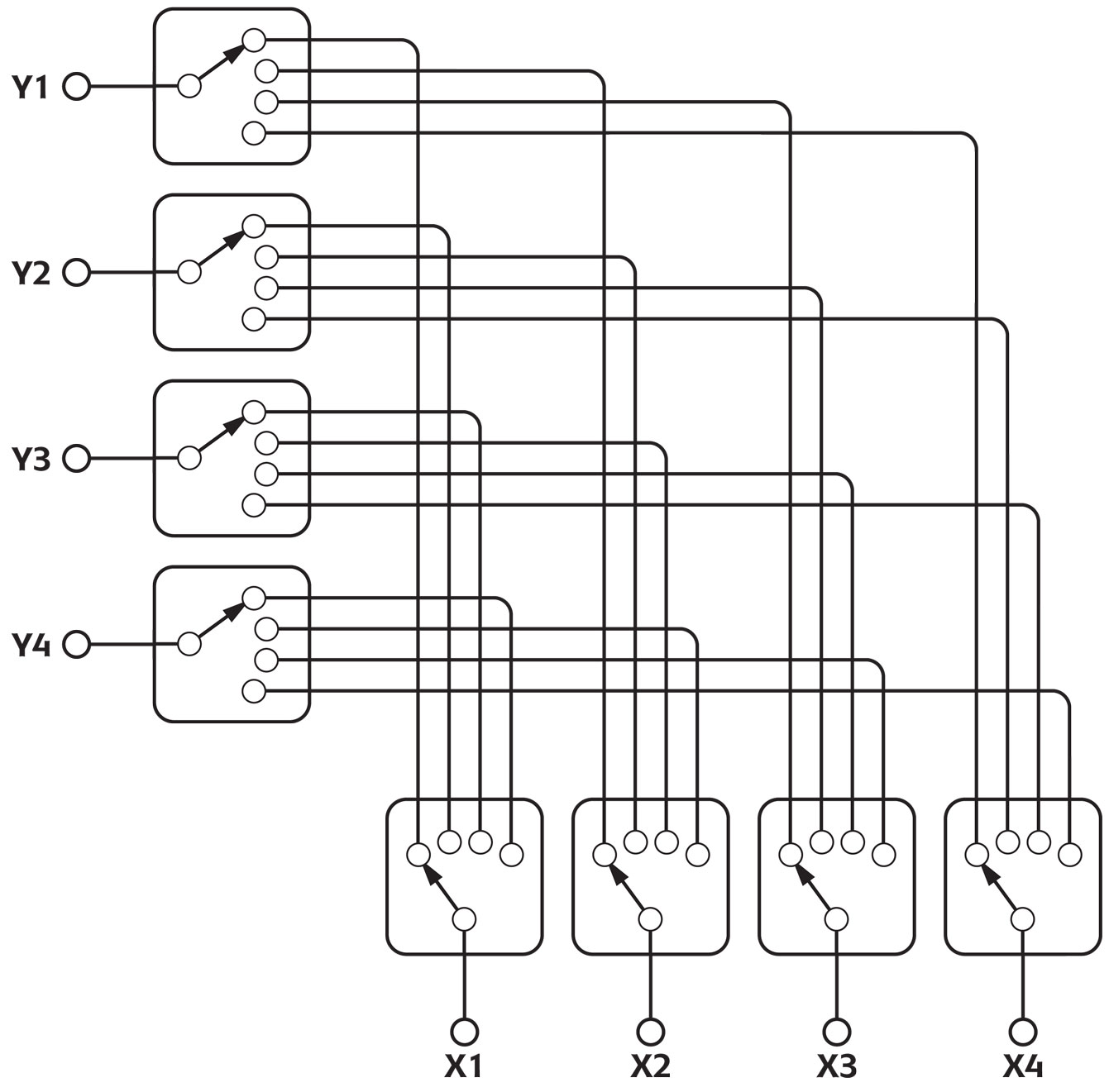 Where BW is important a different construction is required based on the use of a Tree MUX. (see: Comparing Tree and Conventional MUX Architectures).

The matrix is formed by connecting a bank of Y input MUX's to a bank of X input MUX's. For a 4x4 matrix some 16 connections are required to be connected together, and many of these paths cross. The number of connections required grows rapidly as the matrix size increases.

The Tree MUX is optimized for BW, it introduces no open circuit track lengths and it has few relays connected to any particular path. However, it clearly introduces additional costs since the relay count is higher and the MUX interconnection system may require many point to point connection that are expensive or difficult to implement and lead to much lower density designs.

A variation on a Tree or Blocking matrix is a matrix that includes a complex set of power dividers/combiners that allows a signal from two input ports to be summed together on one output port, or to connect an input port to more than one output port at the same time. There are applications requiring this sort of capability but they are complex assemblies which have very high insertion loss because of the power dividers/combiners. If amplifiers are added to overcome insertion loss the matrices become uni-directional.

The term sparse matrix is sometimes used to describe a matrix which has a restricted number of paths allowed at any one time. A simple example is a 6x6 matrix which using the Blocking route described above supports six concurrent paths and requires the use of 12 SP6T switches. A Sparse Matrix might allow only path at a time, in which case it can be constructed from 2 off 6 to 1 switches which have their common connections connected together.

In some cases the designers of a matrix will use a mixture of methods to implement a matrix. They may for example assemble an array of smaller crosspoint switches and then route the signals to them using a Tree MUX or a conventional MUX with adequate BW. Such an approach is more complex for a user to understand, however this complexity should be hidden from the user by the driver software.

One example of a 12x8 matrix is shown below.

On the left is shown a simplified functional diagram for the matrix with isolation switches on the X and Y axis., on the right the matrix is shown to be constructed from a set of four subsidiary matrices (sometimes called Block Matrices).

There are many other ways of designing a hybrid matrix which seek to optimize the cost and performance for particular applications.