When a relay is either opened or closed while carrying a signal we say that the relay is “hot switching” the signal. Hot switching relays has a major impact on life of the relay. Relays that hot switch signals run hotter than relays that don't hot switch, and their contacts will erode much faster. Both of these factors will cause relays that hot switch signals to fail faster than relays that aren't asked to hot switch. Switching system vendors may provide information on how hot switching affects relay life, but before you use this data, take a close look at the test conditions. In general, vendors life test relays with resistive sources and loads. In the real world, however, loads can be both inductive and capacitive, and these loads can shorten relay life more than simple resistive loads. 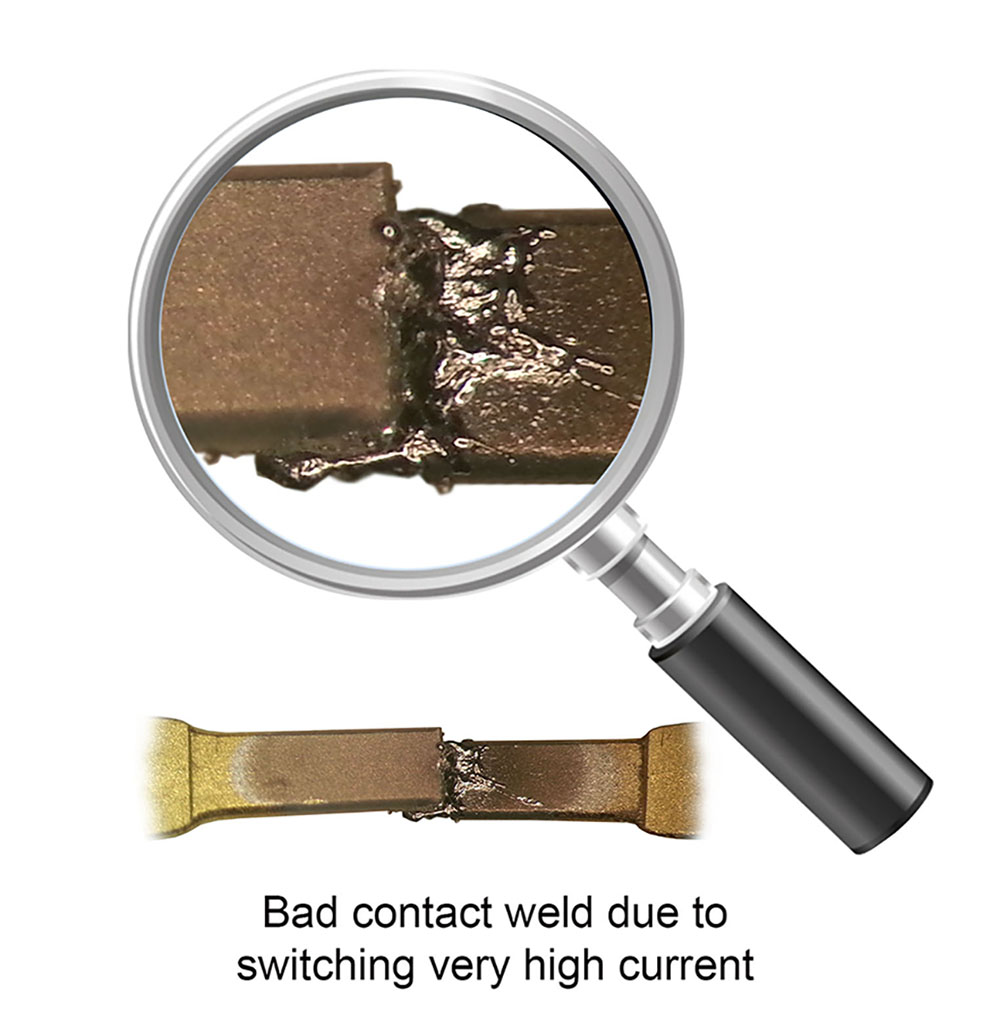 It is not always obvious how much voltage or current that a relay is hot switching. For example, if a relay is connecting a low impedance source to a high impedance load, you would expect the switched current to be relatively low. If the cabling or load has significant parasitic capacitance, however, then there may be a high surge current through the relay when it closes as the source charges the capacitor.

A relay may also experience a high surge current when it connects a source to a capacitive load that is carrying a charge from a previous state. This might occur, for example, when a switching system reverses polarity on a UUT, or if a previous operation has left a charge on a high impedance load. For this reason, some cable test systems provide a way to discharge any residual charge on the cable assemblies before actuating the relays. As mentioned earlier, the specifications for switching modules normally only define a maximum hot switch voltage/current/power when the module is connected to a resistive load. So it should be noted that if long cables or other capacitive loads are attached the rating may be affected.

Switching systems are also typically capacitive at their terminals. If a switching matrix has a large number of closures on a single Y axis to X connections, the capacitance can create an extra load that can shorten relay life when hot switching.

Resistance in the cable wiring and the PCB tracks can help reduce the surge currents, and therefore increase relay life, but this effect declines rapidly as the signal voltage increases.

One potentially dangerous situation is switching a live power supply to a load. The load will commonly have decoupling capacitors and the sudden connection of the power supply can result in high inrush currents. 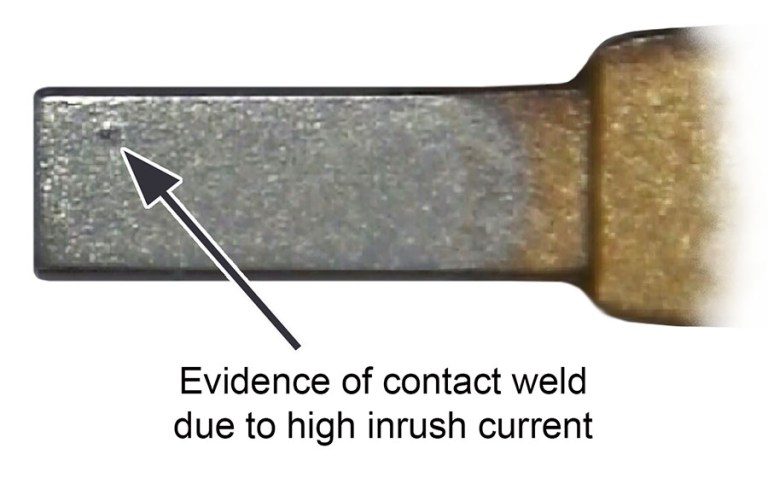 In addition, current limiters on power supplies rely on a feedback mechanism to limit current. The power supply senses the output current and starts to reduce the output voltage when the current reaches a threshold value. This action takes a finite amount of time, meaning that the power supply's current limiting circuits cannot protect the relay that is hot switching the current. Only a resistor will limit the current, and this is the test condition used when testing relays for hot switching capacity. (see also: Life testing relays)

Some relays can withstand high inrush currents. These relays have contacts that have a large wiping action on closure and have contacts made of materials that can withstand high temperature. One possible disadvantage of using relays designed to handle high inrush currents is that they have higher contact resistance with variation in current (resistance reducing with increasing current) than relays designed for small signal applications.

Solid state relays are generally considered to be more robust for hot switching power supplies since their ability to handle inrush currents between capacitors is often more than an order of magnitude greater than their steady state current handling. (see also:  Minimum switching capacity)

The most common failure mechanisms for switching system relays used to hot switch signals are:

When a relay switching a signal—especially a high-power signal opens—an arc, or even multiple arcs, might form between the contacts. These arcs increase the time during which contact erosion can occur, and can be especially damaging when the load is an inductive load. When the relay opens, the inductance creates a high voltage spike as the field in the inductor is discharged. The current rating of a mechanical relay decreases as the voltage across the contacts increases, and you must derate this even further when there is an inductive load.

Current ratings for solid state relays are not derated as much as for mechanical relays, but inductive loads can still cause failures by creating voltage spikes that exceed the breakdown voltage of the relay's output transistors. Data sheets for solid state relays can include a maximum allowed switching energy when hot switching, usually expressed in millijoules (mJ). The energy stored in an inductive load can be calculated from 0.5*L*I*I, where L is the inductance and I is the current being carried.

Operating a power relay frequently in a short time can cause additional problems as the arcs generated not only erode the contacts but increase the relay temperature. The more often the arc is generated, the more erosion occurs and the hotter the relay gets. Higher temperatures damage the mechanical parts in the relay, particularly the plastic parts that hold the contacts in place. Some relays require the package to include a vent which is open to the environment when used to break a high current/voltage signal at regular intervals to help dissipate the plasma that forms in the relay case.

Arcing is particularly a problem on DC signals because the DC voltage can sustain the arc for a long time. The image below shows what happened when a relay switching a 30 V was opened at time a. An arc was created as the relay contacts part (a) and a gap is created (on very high current relays this creates a visual arc even thru the plastic casing). The arc creates a plasma which continues to conduct until it cools sufficiently. In this example (where the relay is being used beyond its rating), the arc endured for one second before cooling enough to be extinguished (b). 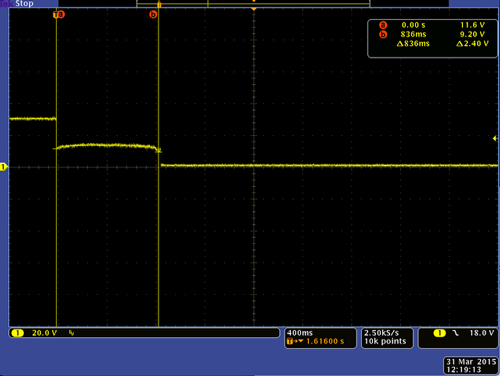 Current is flowing between time a and time b, and the relay package has to dissipate significant power during that time. This type of arcing does not occur in solid state relays.

A slightly different problem can occur when hot switching RF signals. If the source VSWR is high (that is to say that the source impedance is not 50 Ω), then a relay in the open position could have a very high voltage across the contacts before it closes or a high voltage may be created as the relay is opened. Insertion loss will reduce the maximum voltage by attenuating reflected signals, but the voltage may still be high enough to cause damage.

As the operating conditions have a large impact on the hot switching conditions for RF signals, the hot switch power is normally specified with a low source VSWR, unless otherwise stated. If the relay is operated with poor source/load VSWR the hot switch performance will degrade, the degree to which it degrades being highly dependent on the conditions. The most common reason for high RF powers is that the source is a transmitter (or amplifier) and it is usual for these to have high output VSWR to prevent loss of power in the output source impedance.

There are several other considerations you must make when designing a switching system that will hot switch signals. Hot switching relays can, for example, induce resonant waveforms in switching systems. The sudden increase in current and change of voltage levels can excite resonant circuits created in the traces and the external connections to the switching system since the closure event can be very abrupt.

Another thing to keep in mind is that the AC power rating of mechanical relays is higher than the DC power rating. The reason for this is that when switching DC signals, metal transfer between a relays contacts tends to be in one direction, so the contacts erode more quickly. When switching AC signals, metal transfer occurs in both directions and arcs are shorter in duration. Both effects extend relay life.

When handling AC signals derived from the AC supply reactive components (inductors and capacitors) can be problematic and reduce the relay hot switch capacity. AC supply systems typically have many reactive components in them (filters, transformers) which can create issues. Inductive sources or loads can create prolonged arcing when breaking a signal, and capacitive loads can create high inrush currents on path closure.

For some electromagnetic relays, hot switching is actually required to achieve the best contact resistance stability. These relays have a minimum switching capacity, which can be quite low. Below this minimum, the contacts may become dirty and develop a high resistance. In some applications, residual cable charges and capacitance in a system can provide the required surge to clean contacts. Relays intended primarily for RF switching can also exhibit problems after frequent DC hot switch operations. The operation can remove gold from the contacts and make low level RF switching more variable in loss and frequency dependency, especially at lower frequencies. Where possible, it is best to avoid DC switching in RF applications.

Solid state relays can offer "infinite" lifetimes when used within their ratings. They do not cause arcs, nor do they have the contact problems that mechanical relays have. Frequent operation of these relays (above hundreds of Hz) can generate additional heat in the switching process. The faster the switching occurs the less heat that is generated. Solid state relays are a good solution for applications where long life is needed in a hot switch environment.

While in most cases it is best to “cold switch” a signal, that's not always possible. By keeping in mind some of the advice given above, you can successfully hot switch signals and get the most out of your switching system.