Usable Bandwidth of a Crosspoint Matrix or MUX

It may seem simple to understand the maximum usable bandwidth (BW) of matrix but in practice the question is more complex than at first appears to be the case, particularly in the case of crosspoint matrices and MUX's.

For Pickering Interfaces switching solutions most data sheets provide and entry that describes the BW, usually in terms of the frequency at which the insertion loss increases by 3dB compared to its low frequency value when measured in a 50Ohm system.

In user applications however there are several major parameters that need considering, BW is just one of parameters.

What controls the bandwidth

The connection inevitably has stubs on it and the transmission lines cannot be matched â€“ in fact typically the transmission line impedance through the matrix is quite low because of these stubs and the dense interconnect on the PCB. A matrix appears to be very capacitive for this reason.

When BW is measured, typically with a vector network analyzer (VNA), it has to be measured in reproducible conditions and that usually means it is in a 50Ohm system unless the product application target is for a different impedance (for example broadcast systems in 75Ohms, Ethernet in100Ohms differential). The VNA source impedance is 50Ohms and the VNA load impedance is 50Ohm. Many applications where low frequency signals are being handled (for example below 10MHz) the source and load impedance could be quite different to 50Ohm, and that means the BW will also be different under these conditions.

Impact of Bandwidth on a Square Wave


Some applications require a matrix or MUX to pass a square wave signal, the square wave might a specific waveform or it could be a logic signal drive, such as that used on serial connections.

A square wave contains a fundamental signals and then a set of harmonics which help to build up the waveform shape, for a square these will all be the odd harmonics (3rd, 5th, 7th etc) but for a more irregular pulse waveform there will also be even harmonics (2nd, 4th, 6th).

The BW needed to pass the square wave is highly dependent on how important it is to accurately preserve the square wave shapes as both attenuation and phase shifting of the harmonics creates waveform distortion. Good waveform shape preservation is obtained if the 3dB is at the 7th harmonic or higher, but some applications can be served perfectly well with much closer ratios of BW to square wave frequency, for example in the case of serial loops.

where t is the 10 to 90% rise time of the waveform. On this basis a 10MHz BW system could have a rise time of 35ns - which may be considered to be fast enough for sending data at 100ns intervals. Much will depend on the nature of the connection transferring the data. The above formula also assumes that the frequency response is simple - it has no resonant structures - so users should check if the bandwidth of the system appears to be marginal.

It should also be remembered that as with the measurements above there is usually an assumption the impedance of the system is 50Ohms, if it is not then answers need to be scaled accordingly

Typically the low impedance of the matrix means that at some frequency the VSWR, measured in 50Ohms, of the matrix will start to get to an unacceptable value. VSWR creates amplitude response uncertainty because reflected signals in the system bounce around and add constructively or destructively to the wanted signal, and that is made much worse when the signal conditions demand, for example, a very high load impedance (such as a scope or a DMM) with a impedance mismatch.

So in practice signal impedances and the consequent reflections (VSWR) are important parameters which influence the useful BW.

The data sheet might provide a VSWR plot which is measured in 50Ohm or another defined impedance. This is a useful measure if the system is 50Ohm based (signal and load) and as a general rule most engineers would aim for a VSWR below 1.6, and certainly anything above 2.0 is a cause of concern. Crosspoint matrices often have very high VSWR figures before the frequency reaches the 3dB. This may be an issue, but if the system generally uses low impedance circuits (source and load) the apparent VSWR may be better.

Another parameter that may need to be taken into account is the crosstalk. When considering AC signals a selected (victim) channel may have coupling from other channels in the matrix. This might be the adjacent channel(for example Y5 injecting crosstalk into Y4), but layout issues in the design may result in the crosstalk being worse from other connections because of the way the PCB and wiring layout is arranged in the matrix. The PCB layout may not follow the pattern of the functional diagram.

If a signal is being measured then crosstalk from other channels might produce errors in that measurement, the amount of crosstalk that is acceptable is very application dependent. It is also highly dependent on the relative levels of the signals, if a weak signal is being measured in the presence of interference from a strong signal in the same matrix then a better crosstalk performance is needed than if the signal levels were similar.

Crosstalk improves by 6dB for every octave reduction in the frequency being considered, so crosstalk is only an issue as the signal frequencies approach the matrix BW.

As with BW crosstalk is measured in a 50 Ohm system and it should be remembered that if the source and load impedance is increased then the crosstalk will get worse since crosstalk is most often created by inter-channel capacitance. From this perspective it scales in much the same was bandwidth scales with impedance shown here >>

The following plots show a specific example of the performance of a very large crosspoint matrix. As expected the BW such a product is relatively low and the response of the matrix is plotted to 10MHz. 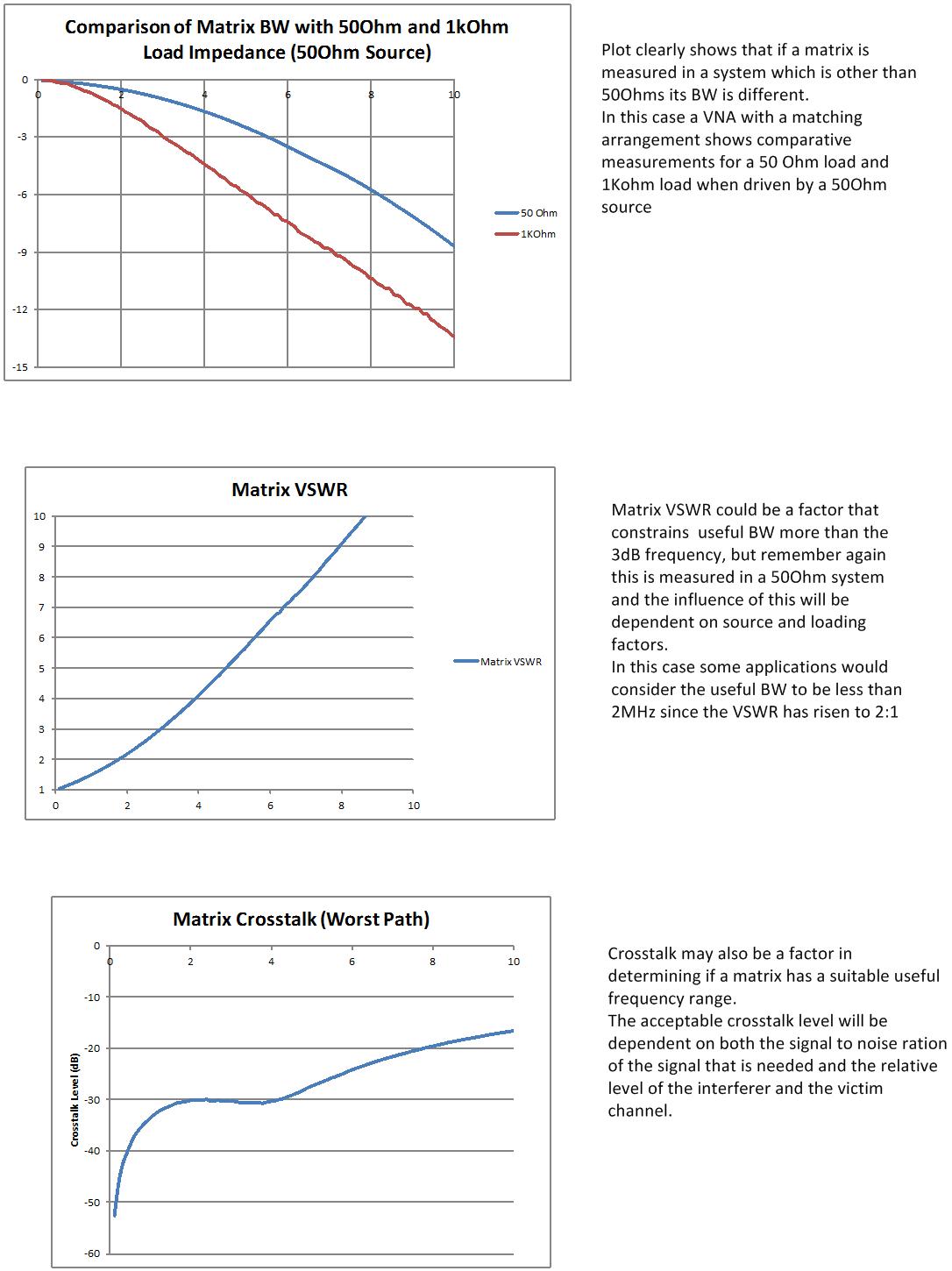