USB and Ethernet are to most common serial interfaces used by PC's to interface with external devices. In each case the serial interface uses one or more twisted pairs of copper wires to send and receive data. The twisted wire pairs form a differential transmission line with a characteristic impedance of 100 Ohms or 90 Ohms .

USB2 serial interfaces use one data pair and one additional wire pair which provides power for the external device (if required), so the receive data is carried on just one wire pair.

For Ethernet (100Mb/s and above) the signal is carried on either one or two receive pairs and one or two transmit pairs, allowing simultaneous receive and transmit. For Power Over Ethernet power is supplied down the same wires by using a voltage applied between the (isolated) wire pairs. The four pairs are only all used on 1Gb/s Ethernet and above, 100Mb/s Ethernet uses just 2 pairs. New automotive Ethernet uses a single twisted pair to carry power and bi-directional  100Mb/s and 1Gb/s, see our article: "Ethernet types for Wired Networks" for more information.

In principle USB and Ethernet signals can be "switched" simply by using a hub or switch which manages the control of data in software. However, in an environment where devices are required to be tested via their serial interface using a managed switch in this way can add start up delay and be cumbersome, particularly in a system where many identical devices might be connected (for example when doing product quality tests) and resolving the individual devices can be awkward.

Ethernet is also the basis for the AFDX interface used in Avionics to provide device communications within an airframe, it uses 100Mb/s (100baseT) Ethernet with one transmit pair and one receive pair. Other variations of Ethernet are used for Automotive applications to provide communication between the car's electronic subsystems.

In reality the differential drives are not perfect, so some movement of the common mode signal voltage levels does occur and the receivers used in the interface have to cope with this variation. In Ethernet transformer coupling of the pairs restricts the common mode signals (because Ethernet can operate over long distances transformer isolation is an essential part of the specification) while in the short distance USB system a direct coupled connection is used. The recommended USB range is limited to 5m by protocol issues on USB2 systems.

1Gb/s (1000BaseT) Ethernet uses a more complex modulation scheme than 100Mb/s scheme and uses all four twisted pairs. For this reason it is more sensitive to noise and defects in the differential pair transmission line.

For aircraft systems new airframes are moving from point to point communication systems (with redundancy) to a situation where a shared Ethernet like connection (with redundancy) is used in order to save the weight of the wires involved. Using a serial interface also allows protective measures to be applied to the much fewer cables required for AFDX.

The 40-736 is well suited to checking the connections based on Ethernet cable. As it is a physical switch that switches the common to one of up to 16 outputs with a physical continuity through the switch equipment such as network cable testers can be connected to the 40-736 and the 40-736 used to probe the cable runs with the data being captured by the cable tester. The 40-736 maintains the required differential line impedance ad provides a simple and efficient method of checking through each run in turn with no user intervention.

As with Ethernet connections, the 40-736 also permits the easy connection of a test system to one of multiple devices with an AFDX port. As the switch is physically managed it is simple to establish which of the devices the test system is connected to - important when several identical devices are to be tested concurrently.

A preferred solution for USB switching is the 40-737 which is available with a USB connector interface (USB Type B for common and USB Type A for outputs) or a higher density D Type interface. In the case of USB2 applications it is particularly important that USB2 connections are kept as short as possible.

The 40-738 offers a very different solution for USB switching. Instead of simply switching a USB common connection to one of 8 USB output ports via relays it provides a USB hub solution. A USB hub expands one USB connection to many connections which can each be accessed in turn. The USB hub is connected to the PXI backplane which in turn is connected to the PXI controller's PCI system - so it appears as if a USB device mounted directly on the computers PCI system. The 8 outputs from the hub include switching which allows the user to connect and disconnect USB devices using the standard Pickering Interfaces switch drivers, allowing USB devices to programmatically connected or disconnected in the system. More information on this solution can be found here describing how the 40-738 can integrate USB UUT's and test equipment into PXI systems.

The recommended PXI product for switching Ethernet signals is 40-736. This module has been carefully designed to ensure that it maintains a well matched differential transmission line impedance in all switch positions. It is capable of switching 1Gb/s Ethernet (1000baseT). In addition it provides the RX/TX reversing switch applications that need to simulate the impact of crossover cables on 100Mb/s systems and below. For 1Gb/s applications the 40-736 provides a solution for driving up to 8 Ethernet devices, for 100baseT applications it can drive up to 16 devices. An interface card is available that converts the user I/O connector to the standard RJ45 connector, having 8 outputs and one common input.

The 40-736 is well suited to AFDX applications which is based on the physical characteristics of Ethernet components.

The 40-736 can be used for switching other serial interfaces requiring differential pairs, such as RS232 and its derivatives and POTS (Plain Old Telephone Signals).

In some applications there is a requirement to perform fault tolerance tests on serial busses such as Ethernet, for example where it is used in the automotive industry. For these applications the 40-201 provides a solution that supports up to 1Gb Ethernet and allows faults to be introduced, such as shorts across the data pairs or shorts to ground. For more information see here

For USB switching Pickering Interfaces recommends the 40-737 which has been designed to minimize voltage drop in the power lines and is characterized to the USB transmission line system. It also has has options that directly use USB connectors to simplify user connections. For applications where a USB hub is required the recommended solution is the 40-738.

For applications where even higher bandwidths are required users can consider using RF MUX's, such as 40-870 series or microwave relays such 40- 874A. These switches are single ended with an impedance of 50Ohms, when a differential signal is split so one MUX carries half the signal and another carries the other half the result is a 100Ohm differential impedance. Users need to make sure the two routes use the same cabling distances and the same path through the two MUX's to avoid time delay in the between the two halves of the signal. This approach can be used for applications such as high speed LVDS. 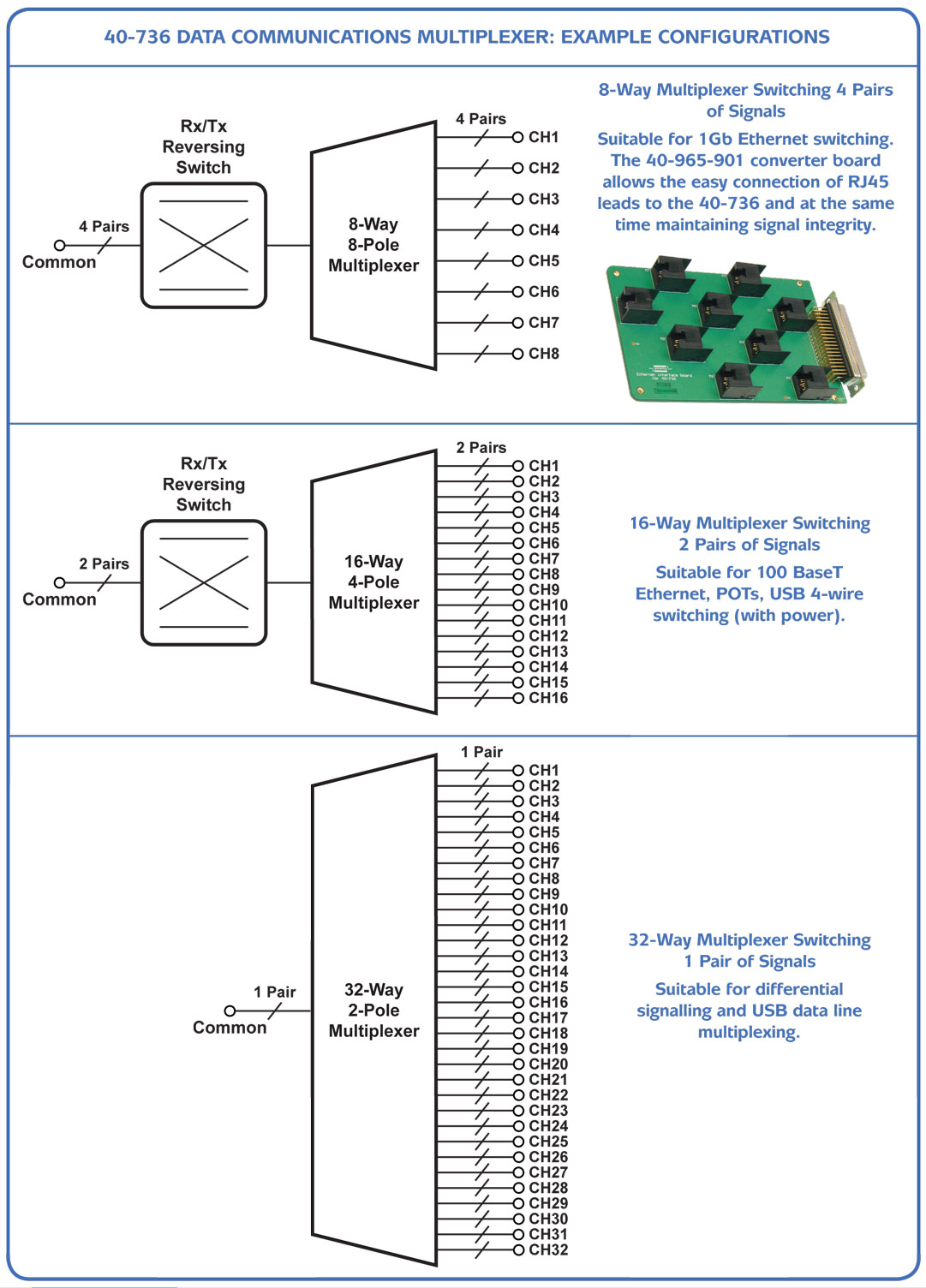