BIRST Background - Why Is It Needed and What It Can Do 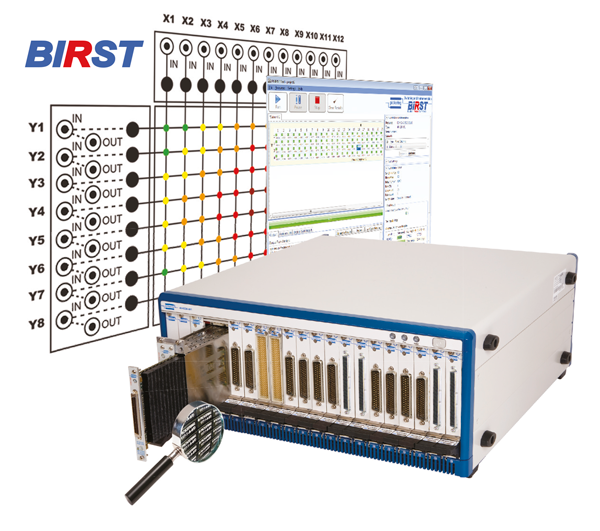 This article details the reasoning for and capabilities of the Built-In Relay Self-Test tool present in most of our high-density switching matrices.

Switching systems are a vital part of any test system, and they allow users to connect their test equipment to the unit under test (UUT) in different ways. This ensures that a common set of equipment can be easily connected to different parts of the UUT during the test process. Therefore, it reduces the quantity of test equipment required to carry out the test.

Switching based on modern mechanical devices has a limited, albeit very high, lifetime. Typical Electro-mechanical Relays (EMRs) are often quoted in the order of 100 million operations under light load conditions, and instrument grade reed relays have lifetimes in excess of 1 billion operations.

Key factors that affect switching systems are the load characteristics and the conditions under which the relays are operated. Whatever the type of mechanical device, as soon as the relay has to close or open with signal applied, the operation becomes a "hot switch" event. At the point the contacts close or open, they are carrying a signal that generates an arc inside the relay that erodes the precious metal contact materials. The load present strongly influences relay life during these hot switch events, a variation of three orders of magnitude (1000) is a common change in lifetime between a light load and a full load. Designers try to avoid hot switching, but the reality is that some tests require it to keep test times low, avoid having to restart systems between tests, or to simulate conditions such as intermittent faults. Hot switching is a compromise that designers have to manage in their test systems.

Even so, many failures in test systems are not caused by the relays reaching their normal end of life; a few are due to manufacturing defects that are not detectable by testing during construction. Many more though, are caused by accidental events that occur in the system. A common source of this is during the integration of the test system—cabling and software errors can accidentally connect parts that were never intended to be connected, such as accidental shorts on power supplies or accidental hot switch events into capacitive loads. The relay may withstand these accidents but with partial damage to its contacts will shorten its operational life. Even when the system is operating correctly, an attempt to test a faulty UUT can stress the switching system, forcing operation beyond the specification of the relays.

The vulnerability of the switching system has resulted in users requiring a system check that includes a way of testing the relays. Some platforms, such as VXI, have historically offered a self-test facility for the switch modules, but the degree of coverage such a self-test provides varies. Sometimes it tests the relay driver system and not the relay contacts (the most likely part to fail). Some products test the relay contacts but are unable to test isolation relays. VXI products have included this capability because the prime customers (usually military or aerospace) have demanded it, and there is sufficient space in the product for self-test hardware.

Smaller footprint platforms, such as PXI, have not always provided self-test. The burden on the design to include self-test can be high in terms of space, which reduces the switch density that can be achieved in the module and increases cost.

For these lower cost and space-constrained products, some vendors have added relay operation counting. With this feature, the application software simply counts how often a relay has been operated, the intent being to replace the relay when the number of operations reaches a threshold. As a tool, this method has some limitations:

The consequence being that switching systems can have a much shorter or a much longer life than a relay operation counting system will indicate, and the error bands are measured in orders of magnitude rather than a few % points.

The situation can get worse if the user performs maintenance based on relay operation counting. Early "preventative" replacements risk disturbance to the system and, in the case of rework, potential damage to PCB tracks, particularly in the case of surface mount parts. There is much to be said for the "if it's working, leave it alone until you have good reason to suspect it is has a problem" philosophy.

System integrators often include a degree of self-test at the system level, often by using a custom test adapter to loop-back test instrumentation vea the integrated switching system. The investment required to do this can be quite high, and the more complex the system, the harder self-test is to implement. The integrator has to understand the way the system routing is performed both at the cable interface level and within the switching products themselves. Such self-test routines will certainly identify most gross faults in the system connectivity. However, they do not easily find intermittent paths easily or diagnose exactly where a fault is, for example, which relay in the switching system or whether the fault is a relay or cable.

We launched the first of a new generation of PXI matrix solutions in 2009, which included a built-in self-test facility, called BIRST or Built-In Relay Self-Test. Since that time, we have included BIRST in all of our new high-density PXI & LXI matrices whenever possible. BIRST is implemented as a compact hardware addition to a matrix module which, when used in conjunction with an associated software application, allows the self-test of a switching matrix by measuring the resistance of each path in the matrix with milliohms repeatability. Relays are checked for correct operation, so welded closed and open relays can be quickly discovered; the resolution of the measuring hardware allows relay contacts with variable resistance to also be identified. The location of individual faulty relays is determined rapidly, in most cases without ambiguity or to within a very few devices.

The BIRST testing process comprises of a few simple steps. Before beginning testing, the user disconnects the module from the test system and executes the BIRST application. The application user interface (see Fig. 1) allows the operator to scan for both local and network connected modules. From these results, the required test target can be selected. 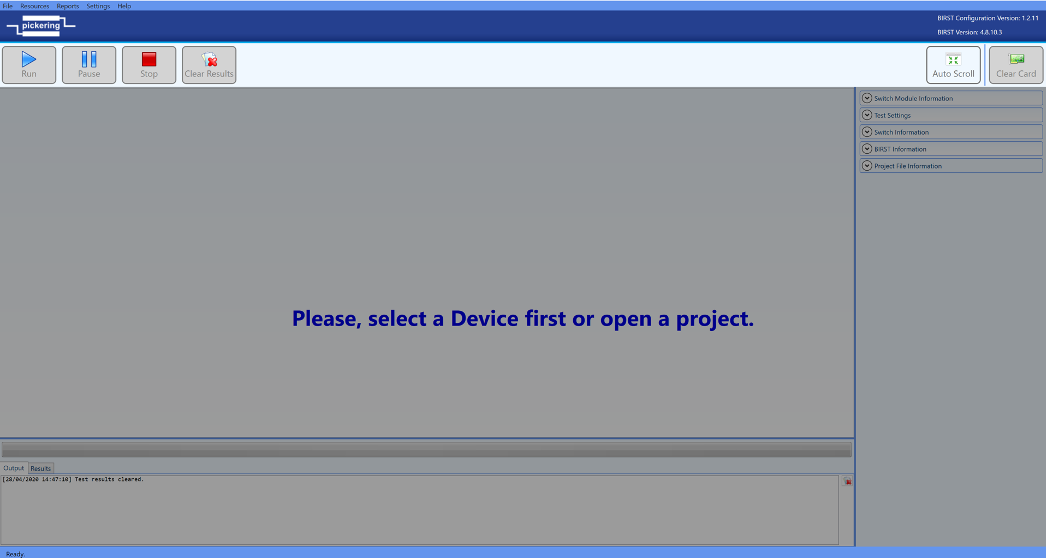 Once the module to be tested has been selected, a graphical representation will be displayed (see Fig. 2) that contains the cross-point X/Y references and the specific relay identifiers.

The application provides zoom and scroll features for ease in identifying specific relays for large matrices where the size results in condensed relay identification text.

The automated testing process is fast, each relay requiring just a few 10's of milliseconds to test thoroughly, representing a significant time saving when compared to manual checks.

The software then displays the test results in the graphical representation of the matrix, highlighting the pass / fail status of each relay (see Fig. 3 where all have passed except RL0004) and allowing the user to quickly identify any faulty device(s) within the module. 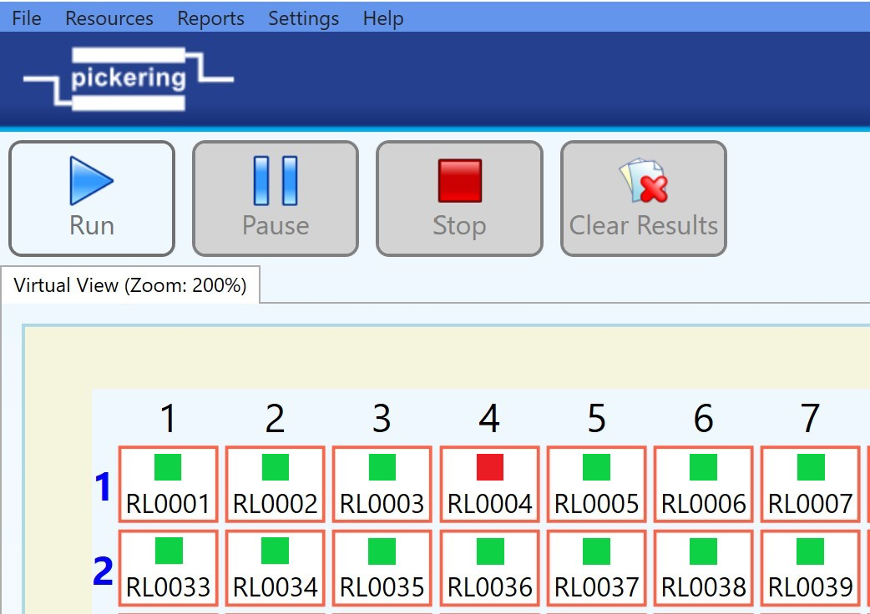 Once the testing is completed, the user has the option to export a printable report (see Fig. 4) containing the details and results of the performed test. This report can then be used, if required, during the module investigation/repair process. 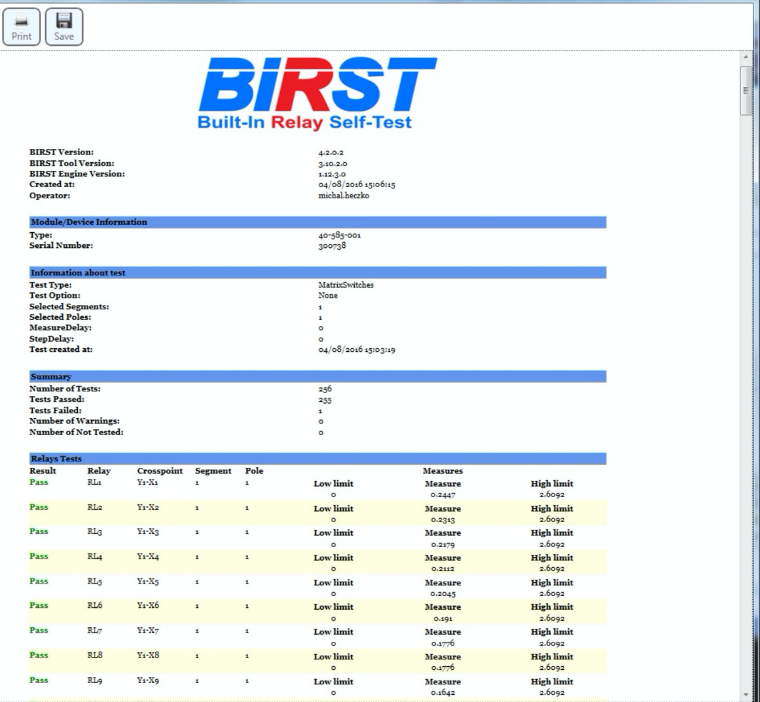 Equipped with the BIRST test report, th user can quickly and easily repair a module with commonly available tools, as practically of our products use through-hole relays. If performed by skilled operators, this self-repair process will not invalidate our standard 3-year warranty. After repair, the BIRST test can be repeated to check that all faults have been cleared. The ability to identify faulty parts coupled with the ease of replacement means that system downtime is reduced, and a working module can be returned to service with minimal delays.

The BIRST tool addresses the shortcomings of the older self-test systems and the relay counting methods. It allows users to get the maximum life and performance from their matrix modules with little additional investment. As BIRST can also identify relays with higher than expected path resistance, it allows maintenance to be scheduled before component failure—thus avoiding unnecessary system disturbance and downtime.

Some care should be taken in trying to relate BIRST results to the datasheet specifications. BIRST explores the switching matrix using various alternate paths when compared to the front panel connector. These paths are used to probe and discover faults, often having longer connection lengths and more relay contacts resulting in higher resistance measurements.

Also, the datasheet specifies the path resistance at the point of manufacture. As the relays age, the resistance may increase depending on the switching conditions and the type of relay. In many cases, an increasing resistance may also mark the early onset of end of life issues.

BIRST relies on accessing the switching system by either two connections (for one-pole solutions) or four connections (two-pole solutions) directly into the matrix, avoiding the front panel connector. With just these access points, the BIRST measurement engine, using complex routing techniques, can explore the matrix to perform the required measurements. The inclusion of matrix isolation relays may prevent complete testing; however, the addition of a simple external fixture could provide this functionality with BIRST. On configurations other than matrices, there is no easy way of establishing a through path that can be uniquely identified without requiring many more relays to be added to the design.

In 2015, we introduced a range of external plug-in test tools called eBIRST, these tools provide a much wider degree of coverage of our switch modules and include support for non-matrix products. For more information, see the  eBIRST and BIRST article here.