While it is possible to embed a specific driver into your code, the full power of the IVI driver concept is only fully realized if the code is written in a way to make the code interchangeable from one card to another. Here's how to do it using National Instruments software and Pickering switch cards.

This code shows 3 different ways in which the card can be initialized:


In the 2nd case the code does not explicitly refer to the Pickering card, this is handled in MAX. The resource string is a a Logical Name, if a different card is required, it is sufficient to modify the settings in MAX to point to a different Driver Session. In this case any suitable Pickering switch card could be interchanged with the original simply by modifying the IVI configuration store in MAX.

In the 3rd case the Pickering driver is not referred to, instead the generic IviSwtch class driver is used. In this scenario it becomes possible to interchange switch cards from different manufacturers, again defined in the IVI configuration store.

Of course, it is essential that the alternate card offer all the channel names used by the original, so normally it is not possible to substitute a card of smaller size, however any card of similar capability may now be substituted for the original by a simple change to the settings in MAX. The code remains unchanged.

The main MAX entry in the above examples is this: 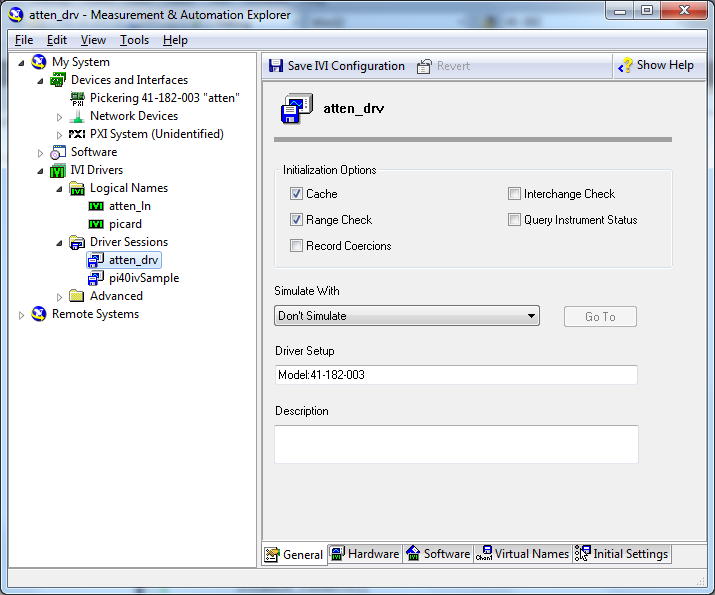 Where cards with different default channel names are interchanged, the channels may be given Virtual Names in the IVI configuration store, which may also be edited in MAX.