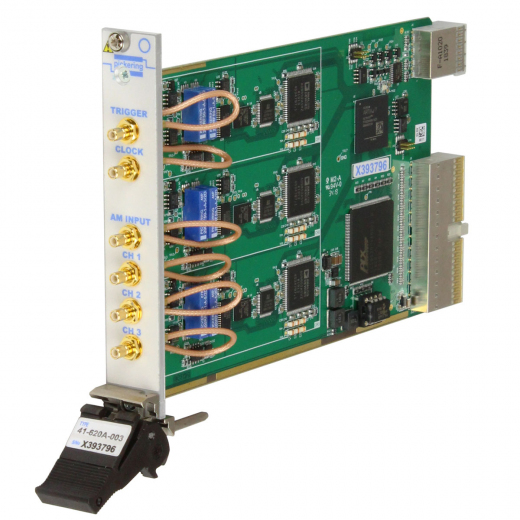 A compact 3-channel function generator in a PXI 3U single-slot module.

The 41-620A is a compact 3-channel function generator provided in a PXI 3U single-slot module and is fully backward compatible with our 41-620-003 module. It is capable of generating sine waves to 10MHz with 48-bit frequency resolution referenced to the 10MHz PXI clock or to an external standard. This module can generate arbitrary waveforms loaded into the internal 256k memory, allowing the function generator to emulate many waveform types, including the typical waveforms of automotive and aerospace sensors.

The function generator has a very simple method of providing variable output frequencies through the use of Direct Digital Synthesis (DDS), making it far easier to use than an ARB for repetitive waveform generation.

It is capable of generating fast swept frequency signals, allowing the emulation of variable speed devices. Sweeps can be single shot events or continuous up and down ramps. DDS technology ensures the settling time is extremely fast, limited only by the update time via the PXI bus.

Each channel can be amplitude modulated from a single AM input connector to allow independent time varying output levels to be produced. One channel of the module can be externally connected to provide the time varying level control independently of the waveform being generated. Waveforms for the function generator are stored in independent 256k memory blocks, allowing each channel to provide a different signal.

Waveforms are easily created externally, using Excel or similar tools, and loaded into the module’s memory via the backplane. When 2 or 3 channels are set to generate periodic waveforms of the same frequency with continuous trigger, they can be phase aligned via a single command.

The 41-620A supports PXI trigger functions allowing triggered events from other instruments to initiate waveform generation or sweeps. The supplied soft front panel allows the 41-620A to quickly generate common waveforms and to import external waveforms. The soft front panel also supports swept modes of operation. Our  high-voltage amplifier (model 41-650) is perfect partner to this module, allowing the generated signal levels to be boosted to 60Vpp. 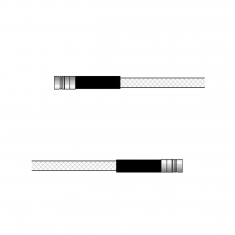