PXI Thermocouple Simulator specs and performance, as well as 'old-school' service key to solving the challenge

When looking to design a new control system to be used across a range of equipment, a global supplier of innovative wafer fabrication equipment and services to the semiconductor industry wanted to build a PXI system using readily available parts that had excellent performance yet were smaller and with lower hidden costs. And the design team was working in semi-isolation due to the Covid 19 pandemic.

The manufacturing company’s test development team creates solutions for control systems used with the extremely hazardous gases and plasmas used in semiconductor manufacturing. Because of the nature of the substances involved, the company performs 100% testing on anything that is a controlling signal in the control system. This latest project called for a large-scale automated test machine to support thermocouple simulation. The complex equipment featured many different temperature sensors.

The company had been using a bulky third-party PXI test system that included a custom computer system also supplied by the test system company. The system took up about as much rack space as an oscilloscope, plus it relied on expensive proprietary software. The test team started looking around for a thermocouple simulation module that could be used with their existing PXI backplane and then hooking up the system to a standard, off-the-shelf computer with higher performance than the existing solution.

An internet search led the test design team to Pickering Interfaces, the global producer of modular signal switching and simulation products for PXI, LXI, and PCI applications. Attracted by the high channel count, the test team bought a series 41-760 PXI thermocouple simulator modules. This module is available in a choice of 32, 24, 16 or 8 channels—each channel providing a low-voltage output across two connector pins capable of providing ±20mV with 0.7µV resolution, ±50mV with 1.7µV resolution and ±100mV with 3.3µV resolution, covering most thermocouple types.

These thermocouple simulators use two-wire outputs with a remote output reference sense to ensure the modules deliver accurate low-level voltages, even if the system has common-mode voltages present. In addition, each simulation channel can also provide an open circuit setting to simulate faulty wiring connections to a sensor. For improved accuracy, each channel of the Low-Voltage Source carries accurate calibration data stored on the module. The module also includes a calibration multiplexer for module test and verification purposes.

However, there was a problem. Every time the team hooked up the simulation module to its equipment, the readings were all over the place. As the team investigated further, they realized that the analog characteristics of the front-end IC used with the thermocouple were not provided on the data sheet. In fact, the common-mode rejection ratio (CMRR) was pretty poor. If the data sheet had included this information, the team would have immediately known that an isolated output on the simulator module would be required.

The test engineers contacted Pickering’s local support team, who confirmed that Pickering also offers an isolated version of the simulation module, the series 41-761. Once the team hooked up the module to the control equipment, there was a “rock-solid output with no dithering.” 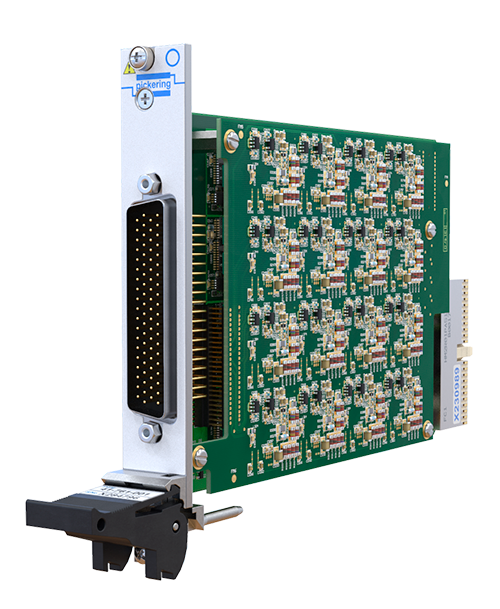 The test team also purchased a Pickering six-slot series 60-106 LXI/USB chassis with both USB and LAN connections on the back. Then COVID-19 started to hit, and life became ‘interesting.’ The team had to find some way to get the chassis and isolated simulation card updated (to be compatible with the pre-existing backplane). They called the Pickering support team, but with bad timing, the local representative was getting ready to go on vacation, and then he had jury duty. However, he jumped in a car and met one of the design team halfway in a parking lot – this was a Friday. The representative took it back to his facility and fixed it up. Then the following Monday, his day off, he met up again with the test engineer in the car park and delivered the new isolated version with the latest software. The test team was ready to go.

6-slot LXI/USB Modular Chassis - Supports up to six of our 3U PXI switching modules—includes USB control & is fully compliant with the LXI Standard 1 .5

Pickering has been in business for over 30 years and aims to offer this level of customer service every time. Even through the pandemic – which has been challenging for everyone and tragic for some, Pickering was still able to help out while meeting safety guidelines.

The test system designed by the semiconductor equipment maker’s controls systems team will be used in the design phase for characterization and production. They believe that portable testers can suffer from instability as the battery drains. Also, these testers cannot be automated. In production test, if you’ve only got a single channel battery-operated thermocouple simulator, you’ll need a test operator moving from one pair of pins to another. With the PXI system based around the Pickering series 41-761 thermocouple simulation module, the process is now automated, saving an estimated 30 mins/unit of manual test. Automation also eliminates manual errors and increases test reliability.

Details such as the soft panel interface of the Pickering products were of real benefit to the test team, enabling them to begin the evaluation process without having to write any code. The panels also feature graphic visualizations of relay switches that switch when you touch them.

In the end, it was the combination of specs, performance and service that convinced the customer that Pickering was truly partnering up with them rather than just selling something.