Ethernet cables traditionally used in domestic and business systems are based on four sets of twisted pair cables bunched in an outer sheath. There is a new type automotive Ethernet that only uses a single twisted pair cable rather than the four pairs in current systems.The following information details the types of cables that are likely to be encountered, the classes of Ethernet they can carry, and the modules that Pickering can provide to switch them. 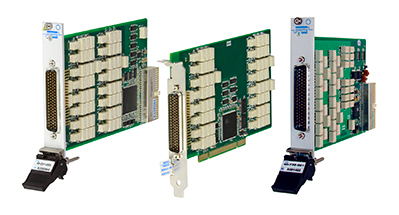 The early Ethernet over twisted pair was 10BaseT, which used the standard RJ45 plugs and network cable that would be Cat3 or Cat4. The cable has four twisted pairs, but 10BaseT uses only two of these twisted pairs for 10Mbps communication. The other two twisted pairs can be used for power over Ethernet and things such as phone systems.

For many years the 100BaseT Ethernet communication has been the standard, this also uses the standard RJ45 plugs and network cables, but in this case, higher grade Cat5 is required for distance. The cable has four twisted pairs, but 100BaseT also only uses two of these twisted pairs for 100Mbps communication.

1000BaseT is the Ethernet standard that many data systems now use, it can utilize the standard RJ45 network cables but over a minimal distance and requires better quality cables such as Cat-5e and Cat-6 to function to full 100m distance. This uses all four twisted pairs for 1Gbps communication.

10000BaseT is the next-generation Ethernet that is on some new systems; it again uses four twisted pairs but needs top quality cables i.e., Cat-6a or Cat-7 for 10Gbps communication over distance. 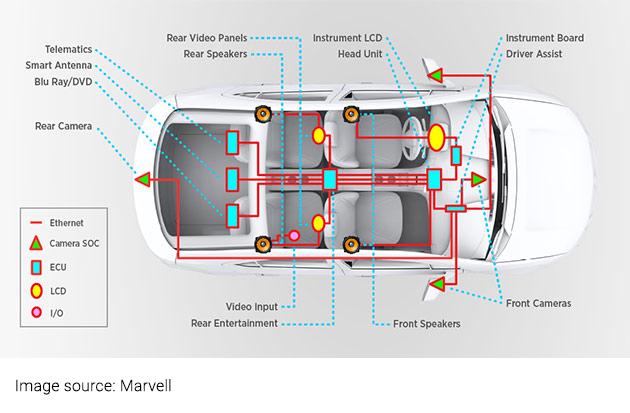 Modern car systems are now moving to Ethernet communication for the ever-increasing electronic system interface requirements. The required cabling would add lots of bulk if standard Ethernet cable were used, so a new form of automotive Ethernet is available which functions on a single twisted pair but for the short distances required within the small system of a car, these are:

100BaseT1 is 100Mbps communication over one twisted pair, hence the subtle T1 designation, it also carries power over the twisted pair. The communication uses specialized coding methods, which means that it only requires 66MHz bandwidth to achieve 100Mbps. The Pickering modules that can switch this are our 40-201 PXI fault insertion, 50-201 PCI fault insertion, and the 40-736 PXI multiplexer.

1000BaseT1 is 1Gbps communication over one twisted pair, again with the subtle T1 designation. It can also carry power over the twisted pair and with specialized coding, can communicate 1Gbps Ethernet over a 660MHz bandwidth. Pickering does not currently have differential modules with high enough bandwidth for switching this communication.

There are several different categories (Cat) of standard four twisted-pair Ethernet cables such as the commonly installed legacy Cat5 cable, as the number increases, so does the bandwidth of the cable over distance. Most current installations have Cat-5e fitted, but for the increasing data-rates of modern systems higher-performing cables are required:

There are several proprietary single twisted pair cables and connectors for the new automotive Ethernet, most appear to not be interchangeable but are compliant with the relevant IEEE specifications IEEE802.3bw and IEEE802.3bp which is capable of 1Gbps on distances of up to 40m.